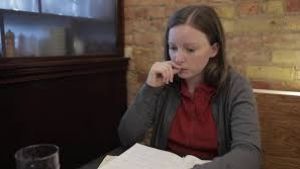 Following on from Never Eat Alone (2016) and Veslemøy’s Song (2018), the third collaboration between Toronto film-maker Sofia Bohdanowicz and actor Deragh Campbell (who co-directs) marks the Canadians out as the pre-eminent producers of contemplative documentary hybrids.

Those with little interest in the formal aspects of cinema are unlikely to fall under the spell of this rigorous representation of writing and research. Subtitles suddenly appear on screen, untethered from any audio or speaker. As a cinematographer, Bohdanowicz’s digital camera work is unfussy and unhurried as it lingers on documents or on the face of Campbell’s Audrey when she pores over those documents.

The title may sound like a Soviet-era action heroine. In fact, it’s the library number of an archived series of letters between Bohdanowicz’s great-grandmother, the poet Zofia Bohdanowiczowa, and the Nobel Prize-nominated author Józef Wittlin.

Both writers fled Poland during the second World War. Their lengthy correspondence lasted from 1957-1994, and spanned two continents. Bohdanowiczowa settled in Penrhos, Wales, and later in Toronto, while Wittlin lived in New York City but travelled extensively.

Audrey, having been appointed literary executor of her great-grandmother’s estate (standing in for the director) journeys to Houghton Library at Harvard University, where the letters are housed.

She ponders the letters, as objects and as messages . She analyses their content with a male translator. Her research, a quiet adventure in unknowability, yields as many questions as it answers. The nature of the writers’ relationship is never entirely clear. Is Zofia a kind of super-fan genuinely fretting over Wittlin’s New York residency – “The city will destroy your soul,” she cautions – or, as Audrey suggests, is there “the fantasy of love”?

Audrey’s absorption is so complete that we’re shocked to discover, in a visual aside, that she’s in a sexual relationship. A verbal tussle with Audrey’s older, fussy aunt Ania (Elizabeth Rucker) erupts within the stillness of Ms Slavic 7 with the ferocity of one of Clockwork Orange’s ultraviolet set-pieces. “You can’t just be a curator, you need a master’s degree, and training,” snaps Ania. There’s more to her outburst, adding to the film’s sustained sense of intrigue and inquiry.