Max Richter’s Sleep: This movie will have you nodding off. That’s the whole idea 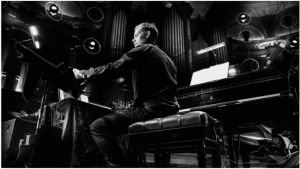 Cynics about ambient and post-minimalist music surely raised the odd eyebrow when Max Richter – the great German-British composer who straddles those genres – announced an 8.5-hour project designed to accompany and muse upon the average night’s rest. “Nobody snoozed to Stockhausen,” they might bellow atonally. But the music was lovely and only proved to burnish his reputation.

This charming if relentlessly laudatory film documents a public performance of Sleep (the clue is in the title) at Grand Park in Los Angeles. Beds were provided and attendees were invited to curl up as the low-frequency drones spread calm about the Downtown area. (One wonders if anybody stormed up to the box office in the morning and complained about paying $80 and not dozing off for a minute.)

We get an edited version of the complete piece as the camera moves about the attendees and orchestra. The unthreatening melody continues as we move away to hear from Richter himself – raised among a quite ordinary family in Bedford – and from family and collaborators.

There is some interesting material on the importance of the Fibonacci Sequence. Yulia Mahr, the composer’s romantic and professional partner, explains how hard up they were in the early days and how they fought against some establishment hostility.

It would, however, be nice to encounter a little grit among the emollient celebrations. “What if you slept and it was sleep you dreamed of,” someone says in a characteristic exchange towards the close. So much mildly expressed positivity could send even the most balanced individual towards the nearest AC/DC record.

Then again, Natalie Johns’s film is, to some extent, designed to replicate the experience of the concert itself. Astringency probably doesn’t belong in a work revolving around the comfort of the kip. The director manages a lovely 100 minutes that serve as an ideal accompaniment to the recorded version.

It ends with a slow stretch and the coming to of an audience that couldn’t look more like well-heeled LA hipsters if they had been cast for that purpose. Others may get to the titles without mouthing the word “woke” but I am made of less stern stuff.

Never mind that. A bit of Sleep will do you good.

On release from September 11th