But you probably won’t, since it’s on Netflix and these days the audience is captive 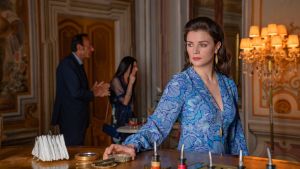 Netflix has scored strong viewing figures with more than few terrible romantic comedies, but they will need some sort of global crisis – the sort that actually shuts people in their homes – to generate repeat viewings for this latest damp atrocity. Oh, hang on.

Love Wedding Repeat, which received its world premiere after acquisition at Cannes 2019, is shameless in its hat-tipping to a popular entertainment from the 1990s.

Full marks to Aisling Bea (about whom we will hear no bad words) for not dying of shame while delivering a startlingly familiar early joke. She’s chatting to an old pal about the ghastliness of a former boyfriend. “Last time I saw her she was like: ‘I’m seeing this dickhead’,” she tells the new paramour. But wait. It’s the same guy. Yes, it’s the “never stopped bonking Toby de Lisle” gag from Four Weddings and a Funeral. All we miss is Bea banging her head off a tree.

The notion of Bea taking over the Hugh Grant role is an attractive one, but nothing so clever is going on here (we’ll get to their one supposed stroke of genius in a moment). Sam Claflin, a good actor in the right role, is here to, um, you know, ah … stutter his way through, erm, posh misunderstandings at a high-end wedding.

We begin with his Jack meeting similarly attractive Dina (Olivia Munn) – who, as reporters never do, identifies herself as a “war correspondent” – in a pleasant piazza before being interrupted by an unwelcome friend.

Some time later, we find him cheering up his sister at her expensive nuptials in an Italian mansion. More or less the whole film takes place in this vulgar pile. So you’d better get used to it.

Tim Key is here as a nervous ninny in a kilt (as worn by somebody in Four Weddings and a Funeral). Joel Fry plays a struggling actor who, for reasons that aren’t properly clarified, acts as maid of honour rather than best man. The bride’s ex arrives uninvited and disturbs her glamorous Italian fiance. Obviously Mina turns up to make life, you know, um … well, tricky for Jack.

Every now and then, the film takes a comic lunge that, if nothing else, confirms an intermittent desire to take risks.The absurd confusion involving potions being dropped in the wrong drinks feels dragged out of a justifiably forgotten Restoration comedy. The complications beneath Key’s guilt would embarrass Dick Emery. And so on.

None of the actors deserves to shoulder blame for the fiasco. Claflin is trying so hard you can see veins throbbing on his worried temple. Fry hammers the weary dialogue like an emergency doctor trying to restart a doomed heart. When we drag out the critical cliche “the location is a character in itself” we do so only to demonstrate that, in comparison to the human roles, even an edifice of bricks and cement seems fleshed out.

Just when you’ve got used to the stupefying predictability – about two-thirds of the way in – the script pulls into a structural chicane so jarring it almost wakes you up. It’s as if, in the last act of Casablanca, everyone swapped costumes and began playing another part. It’s as if, at the close of Ben Hur, we discovered we were watching a computer simulation from the 23rd century.

Actually, it’s not nearly as amusing or as interesting as those comparisons suggest. You’ll almost certainly find out for yourselves. Everyone watches these things eventually.

On Netflix from April 10th