Lady and the Tramp: This production has pedigree 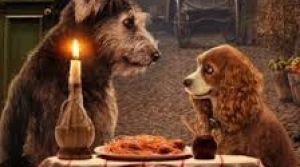 Film Title: Lady and the Tramp

Disney’s latest (almost) live-action reboot of a classic animation has commendably cast two rescue dogs in the title roles. In all other respects, however, this production has pedigree. Blink and you might miss appearances from Benedict Wong and Clancy Brown. Charlie Bean, fresh off The Lego Ninjago Movie with a mouth-watering list of animation credits (Foster’s Home for Imaginary Friends, Samurai Jack) sits in the directing chair.

Following in the footsteps of David Lowery and Alex Ross Perry, Andrew Bujalski (Computer Chess, Support the Girls) is the latest indie icon to take the Disney shilling.

The “Godfather of Mumblecore’s” screenplay, co-written with Kari Granlund, inserts some lovely “yeah, like, but” rhythms into the original material. The plot, however, remains the same. One Christmas eve at the turn of the century, Jim Dear (Me and Earl and the Dying Girl’s Thomas Mann) gives his wife Darling (Dope’s Kiersey Clemons) a cocker spaniel puppy.

Lady (Tessa Thompson), as she’s called, has a happy life with her humans and neighbouring dogs, a Scottish terrier named Jock (Ashley Jensen), and a bloodhound named Trusty (Sam Elliott, surely born to voice said animal?) until one day a street dog named Tramp (Justin Theroux) wanders into her yard with a dire warning: “when a baby moves in the dog moves out”.

What follows is a perfect meet-cute will-they-won’t-they two-step. Or whatever the four-legged equivalent might be.

CG is carefully utilised to give the dogs human expressions and to make sure that no animals were harmed in the making of this picture. The racist and infamous “Siamese Cat Song” has given way to a jazzy tune performed by Deep Cotton and a colour-blind casting policy. (While some critics have taken issue with the film’s perceived “wokeness”, there is something poignant about seeing an interracial couple in a fantasy version of the Deep South in the early 1900s.)

Tessa Thompson and Justin Theroux are so endearing as Lady and Tramp that you wish there was a spin-off sitcom in which they move in beside the canine equivalent of Fred and Ethel Mertz.