A generation of female superheroes in tartan skirts and gabardines 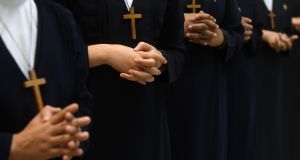 From arts and media to politics and law, it’s the graduates of all-girls Catholic schools who are blazing a trail for independent women. Photograph: Marvin Recinos/ AFP/ Getty

The convent school prefect is having a moment. From arts and media to politics and law, it’s the graduates of all-girls Catholic schools who are blazing a trail for independent women.

Marian Keyes, Aisling Bea, Louise O’Neill, Amy Huberman, Sharon Horgan, Deirdre O’Kane, Claire Byrne and Sally Rooney are some of culture’s most influential female figures with one thing in common: they are products of educational institutions that were run for women by women.

So, too, are politicians such as Minister for Education Norma Foley and Minister for Justice Helen McEntee. The first female leader of the Opposition, Sinn Féin’s Mary-Lou McDonald, attended Notre Dame in Dublin. Our two female former presidents of Ireland, Mary McAleese and Mary Robinson, were educated by nuns.

On our screens, Derry Girls, set around a group of convent school teens, and Fleabag – written by former girls’ Catholic school alumni Phoebe Waller-Bridge – are two of the biggest shows on television.

Who’d have thought the future anointed torch-bearers of modern feminism would have been schooled by nuns? Who’d have predicted the next generation of female superheroes would wear tartan skirts and a gabardine?

Certainly not me. I went to a Presentation for a fortnight, after changing over from a non-denominational, co-educational school. I ran out of the place in culture shock.

It was all girls and prayers. When I subsequently heard Maeve Binchy recalling how the nuns taught her about “men’s insatiable lust” and “women’s holy purity”, I felt I’d dodged a bullet. Maeve was later surprised to found out: “Fellas were like the rest of us. They were normal.”

But Liz McManus, the former Labour minister, says she predicted the trajectory from a long way off. McManus, who attended Mount Anville and then Holy Child Killiney, once cited nuns as her role models. They set an example to the young McManus as women in the driving seat, as educators.

The convent school experience was such a positive thing; you find out who you really are, away from the male gaze, as it were

She believes the seeds of the women’s liberation movement were actually sown, unlikely as it is, within the walls of the convents of Ireland.

“Well, the impression imprinted on my brain was you had a group of women running the show. It was a complex – entirely run by women,” says McManus.

“Who knows, perhaps a bishop was somewhere telling them what to do, but you never had that feeling.

“There was a certain subversive streak in them. At the time, in the late 1950s, it was a sin to send your child to Trinity. They’d say to us: ‘Don’t let that stop you, just apply.’ They were their own women, their own people.

“At their core was equality of education, within this most unusual construct of an all-women enterprise. I think nuns gave it their all. Of course, there were horror stories and nuns behaved very badly in orphanages, and we should never forget that. But where it worked, it worked extremely well,” she adds.

With hindsight, Lisa McGee – creator and writer of Derry Girls – can see the value of an all-female environment.

She attended Thornhill Convent of Mercy in Derry, where alumni include singer-politician Dana and actress Roma Downey.

“The convent school experience was such a positive thing; you find out who you really are, away from the male gaze, as it were. I was raging about it at the time. But it was so good for me. Some of the younger nuns definitely were feminists.

“I had an Irish teacher who was terrifying, but she was passionate about teaching the subject. Another was a working class woman who had attained an education, a career and an opportunity to travel the world, all because she joined an order. She had been to Africa and India. She must have had a calling, but it wasn’t a bad life for a woman who didn’t want to get married.”

The nuns brought a lot to the table, and they should be remembered for that. They were the epitome of feminine professionalism and aptitude

Emer Smyth, research professor at the Economic and Social Research Institute (ESRI), says it is important to point out that girls’ Catholic schools tend to attract the middle class.

“The intake is different. People who go on to careers in the professions and the arts are more middle class in the first place,” she explains.

“In a way, nuns were early feminists. There was subservience in the church, but aside from the patriarchal structures of access, they were the only women for a long time who got to be senior managers. They were the early providers of women’s education.”

“They were incredibly earnest in their belief of what women could do. They were more progressive than they are given credit for, and we came out strong women as a result. There was never a question of us not going to college. It was just assumed that we would. They expected a lot of us and our studies...

“They would talk to us about social awareness, the community, inclusivity, the suffragettes. Their effect on feminism today is something not spoken about – even having religion in a school can be looked upon in scorn.

“The nuns brought a lot to the table, and they should be remembered for that. They were the epitome of feminine professionalism and aptitude. They gave me my courage, my confidence, my character.”

Prof Judith Harford, deputy head of UCD’s school of education, says women were at the vanguard of promoting higher education for women in the late 19th century, with the Ursuline, Dominican and Loreto orders opening colleges for women who were, at the time, excluded from the university sphere.

“Within these elite all-female environments, girls were exposed to both women who were progressive and enlightened, and to women who promoted conservative and conventional ideas.

“The pushing of boundaries commenced in the late 19th century, with religious women advocating for access to higher education and playing leadership roles in colleges. But there is a caveat: some supported the propagation of a gendered ideology which afforded women subordinate status within a deeply hierarchical social fabric and church structure.”

Not surprisingly, the number of teachers who are members of religious orders has dropped sharply over recent decades

Deirdre Raftery, professor of the history of education at UCD, notes how nuns pushed for education for girls who could not afford boarding school, and battled the bishops on rights such as higher education and training for themselves, and access for young female students to the Civil Service and university.

“Convents also presented opportunities to girls who became nuns, at a time when they had little opportunity. It offered them an alternative to marriage and motherhood, and gave them a route to teacher training, nursing and missionary work overseas,” says Prof Raftery.

She directs us to the best-known feminist of our era, Germaine Greer, to encapsulate the feelings of many schooled by nuns. Greer, a former Presentation girl, said: “They worked harder on me than my mother did. They really loved us. I realise that now, although I didn’t realise it at time.”

How many religious remain in schools?

The recent death of Dr Margaret MacCurtain – or Sr Benvenuta as she was known by generations of students – has placed into focus the contribution of nuns to Irish education.

Not surprisingly, the number of teachers who are members of religious orders has dropped sharply over recent decades.

A survey in 2004, estimated there were just 50 religious still teaching at primary level and 20 at second level. Teachers say the numbers have fallen significantly since.

Notwithstanding the drop in numbers, the links between schools and the Catholic Church remain strong.

About 90 per cent of primary schools are under the patronage of the church, while at second level about half of schools are associated with religious congregations.

Many more, however, remain involved in pastoral work at primary level or secondary schools, with more than 100 religious employed as chaplains in community schools.