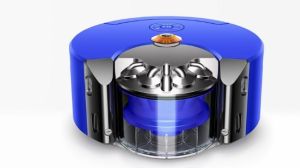 Dyson 360 Heurist: It has extra sensors that can see two metres ahead of it and scans the room every 20 milliseconds to avoid banging into furniture.

It’s a generally accepted fact that I will go a long way to avoid two things: ironing and vacuuming. Since they have yet to come up with a usable robot that will tackle the ironing for me, I’m stuck with that for now. But there are plenty of devices to take on the vacuuming, as long as you don’t ask them to do the stairs.

Dyson’s 360 Eye was released in 2016, promising to do better than the crop of robot vacuums on offer. It had a proper brush bar for a start, and a Dyson digital motor that made it fairly powerful for its small size. It was app-controlled too, and once it was connected to wifi you could instruct it to clean your house from the comfort of your office, commute home or even overseas.

But that was four years ago, and things have moved on since then. So how has Dyson developed since then? With the Dyson 360 Heurist, it offers a smarter, more effective robot.

How is it smarter? It has extra sensors that can see about two metres ahead of it and scans the room every 20 milliseconds, which should in theory make the Heurist more likely to recognise furniture instead of blundering into it . That joins the existing sensors that Dyson already had in the 360 Eye, including the drop sensors and the 360 camera on top.

The Dyson Link app plays a big part in the Heurist’s smarts. When you first run the set-up, you can send your robot cleaner off to map your home. Once it’s mapped, you can divide it into rooms – the living room, the kitchen, the hallway – that can be individually cleaned at different times, according to your needs. So maybe you don’t need the hallway cleaned every day, or the utility room can stretch out to every three days.

With that updated ability comes new features. You can give the cleaner specific instructions to only use low power in the hall, or disable the brush bar in an area of a room where you know a deep pile rug will cause it some problems. It solves the Ikea Poang problem nicely; you simply tell the Heurist not to climb in that area and your cleaner will no longer get stuck on the base of the chair. Personally, it means I won’t have to rescue the 360 from the base of my son’s high chair, for example, or prise it off the door stopper.

Another welcome addition is something that you would never consider to be an issue: an LED light. If the original version of the 360 ventured somewhere dark, that was it – the cleaner would stop, with the camera on top no longer able to see its way. It’s unlikely that you would be sending the Dyson to clean in the pitch-dark, but there are corners of your home where the 360 Eye would have struggled. The 360 Heurist comes with a ring of bright LEDs on top, and it only illuminates the ones it needs to light its way. They’re bright too; they came on automatically while I was leaning over the Heurist to see why it had paused and I wound up seeing black spots for a while afterwards.

One warning: once the Heurist has mapped your home, don’t move the dock without letting the robot have another run around to get used to its new position. Otherwise it will wander around your home, slightly confused and trying to line itself up with the dock like a slightly inebriated R2D2.

All that is great, but the important question is: does the 360 Heurist actually clean well? Dyson has boosted the suction by about 20 per cent, and given you an extra mode – quiet, high and max are your options now – plus a refined brush bar. The end result is a robot that leaves your floors almost dirt-free, regardless of whether it is tiles, wood or carpet.

Now if only they could figure out how to get a robot to tackle the stairs.

Smarter and better than its predecessor, the Heurist has more processing power, more sensors and does a better job. The LEDs mean no more getting stuck in random darker corners of your home, and the ability to apply restrictions to the map of your home makes it less likely that you’ll come home to a robot with a depleted battery that is waiting for you just inside the door of your home.

It’s not a cheap product. Plus the bin on the cleaner is still smaller than your standard vacuum, so you’ll have to empty it more often.

The Dyson Link app is the same one that Dyson has used for all its smart home devices, so you won’t need a new app just for the Heurist.

If you hate vacuuming, this is a worth every cent. Just don’t forget to clean the filter.