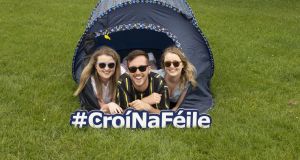 Music fans flock to the constantly evolving three-day celebration to see their favourite bands on a festival site known for its dynamic stage designs and creative art and design installations.

The annual celebration of music and the arts has grown exponentially since it was first held as a day-long event back in 2004. And, unlike most mainstream music festivals in Ireland, it provides dedicated Irish language entertainment and accommodation for festival goers.

Details have been released today of what picniceoirí can expect at this year’s festival. The Puball Gaeilge returns for the 12th year in a row and campers can stay in the official Gaeltacht camping area which will feature workshops and entertainment onsite.

The Hazelwood After Dark programme will feature Croí na Féile sa Chollchoill where attendees will be entertained by poets and musicians of bilingual collective REIC who will guide picnickers through the woods. Featured acts include The Housekeepers, Just Like Us, The Shandrum Céilí Band, Dó Fá Dó with Disco Anocht taking to the decks under the cover of darkness in the moonlit woods.

“We are really looking forward to building on that this year with both the Hazelwood After Dark stage and the Gaeltacht campsite - especially now that the Hazelwood will be located within the main arena,” she added.

The official Gaeltacht camping area will feature workshops and entertainment onsite, including pop-up trad sessions, yoga in the mornings and a designated area to relax and to seize some photo opportunities with props and a flower display.

Gaeilge will be the main language spoken in this area and registration is open to ticket holders only at gaeltachtep.eventbrite.ie as of today, Monday 8 July - with only a limited number of spaces.

This year’s main headliners include The Strokes, Florence and the Machine, Hozier and The 1975 with hundreds of other artists and attractions billed to tempt picnicers.