Despite her groundbreaking music, opinions about her body always, always get in the way 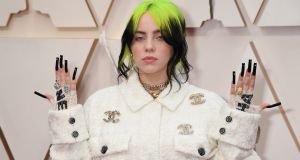 It’s a sorry, and slightly ironic, state of affairs when popstars need to conform and blend in with the “sexy set” if they don’t want others talking about their physical appearance. But this is a weird year, and so here we are.

And so it was this week, singer Billie Eilish (18) was photographed by paparazzi going about her business in an unremarkable tank-top. This wouldn’t normally be news, but amid the current glut of flesh-flashing pop pixies, Eilish’s trademark style – hoodies, baggy shorts, heavy boots, a general air of sexless, uncompromising originality – become a talking point.

The Grammy-award winning singer wasn’t going the full Kardashian on it by any means, although the online commentary seems to have thought so. Some felt compelled to make public note of her very normal, non-Photoshopped body. One commentator – male, older, presumably has six fewer Grammy awards than Billie Eilish – made mention of her “mid-30s wine mom body”, resulting in an almighty backlash.

Bodyshaming is the ultimate weapon wielded against women in the public eye, but Eilish appears largely unfazed by the commentary. She did however share a video from TikTok in which YouTuber Chizi Duru summed up what most normal-thinking people feel.

“Y’all gotta start normalizing real bodies okay?” she noted. “Not everybody has a wagon behind them. Guts are normal, they’re normal! Boobs sag, especially after breast feeding. Instagram isn’t real.”

Eilish’s personal style has evidently arisen from a desire to clap back against the double standards that pop artists have long been held to.

It’s the very definition of body neutrality, which in the pop world is a vantage point that borders on the radical

“Nobody can be like ‘oh, she’s slim thick. She’s not slim thick. She got a flat ass. She’s got a fat ass.’ No one can say any of that because they don’t know.

On first impression, Billie Eilish doesn’t look like your “typical” pop star, with her shock of neon green hair and a heavy-lidded stare that gives nothing away. But then you realise that this clapping back against the norm makes her the perfect kind of popstar, albeit one probably ahead of her time.

Many of today’s biggest female pop icons have taken a careworn path. There is something depressingly uniform about their Insta-friendly gait, their inoffensively pretty gloss; their apparent compliance in using their bodies as their prime commodity. Even the most talented and spirited artists, from Lizzo to Adele, are rarely written about without reference to their bodies. These stars are, more often than not, the sort of pleasant blank canvas that teenage girls (and boys) can project their fantasies and aspirations on; something that has made pop music successful for decades. But we were in dire need of a maverick, a firebrand, and now we’ve got one.

In a deliberate bid to hose down those with too many opinions on what clothes she chooses to wear, Eilish has found her “non-style” a bit of a talking point. Her refusal to play the sexy game, likely born out of sheer apathy, is now seen as a sort of protest. Would this obsession with sexualising or body-shaming Eilish have happened if she dressed like every other young gunslinger at the Grammys? It’s hard to tell.

Either way, it’s a pretty unfortunate turn of events for a musician of Eilish’s calibre and standing: no matter how groundbreaking or well-received the music, this conversation about her body always, always gets in the way.

It’s worth asking though: why does Eilish’s refusal to be objectified bother some people so much? It’s not as though there isn’t a wealth of other teenage popstars to ogle, or lust after. Is it the baggy shorts? Or is it the instance of a young woman taking control of her own body, that seems to grate?

Eilish is still in her teens, and given her glittering form as a musician so far, the smart money says that her best musical works are ahead of her. How tantalising to think that in the future, she could be taken at face value for her true creative worth, without her physicality getting in the way, just as it has done way too many times before.