Be Good or Be Gone: A promising low-budget crime caper 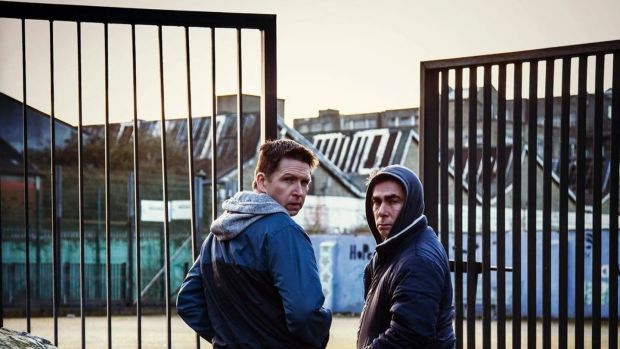 Be Good or Be Gone is ultimately a strange beast

Film Title: Be Good or Be Gone

You won’t need to be told that this low-budget Dublin crime drama begins with a vocal by Damien Dempsey – who is to the genre as Curtis Mayfield was to Blaxploitation – or that it features an off-the-peg villain with a noisy cocaine habit. This is a world we have seen in half a dozen low-budget pictures. But Cathal Nally has brought a few fresh moves to his agreeable feature debut.

He starts with a sound central premise: two geezers are released from Mountjoy for a few days and cope indifferently with old temptations. Ste (Les Martin), an intelligent fellow, can’t quite convince the mother of his child (Jenny Lee Masterson) that he is back on the straight and narrow. Weed (Declan Mills), an unstoppable drug user with a limited grasp on reality, is doomed to get the wrong end of any available muddy stick.

The film is at its best when it allows the two leads to bounce off one another unmolested. Sitting on a canal lock, a slate-grey Dublin sky behind them, Weed complains about the amount of foam in his overpriced coffee. Ste explains that you pay for the “ambience”.

There are inevitable reminders of Adam & Paul here, but the personalities are more starkly contrasted. If he can just shake off the villains who nudged him towards “the Joy”, Ste has a chance of making it in straight society. Weed is always going to need a protector. The two leads establish a nicely balanced rapport that allows them to make the best of a few forgivably Tarantinoesque flourishes. The repeated gag about Weed’s aspirations in the world of high fashion is not overplayed.

The crime plot is less successful. We have seen enough deranged kingpins with colourful lines in apocalyptic threat-making to fill the Grand Canal Basin. One unfortunate outbreak of cavalier violence against a woman could have been left on the cutting-room floor. The film-makers are more comfortable with the cartoonish blood-letting that befalls the heroes and their antagonists.

Made for jam jars and small change, Be Good or Be Gone is ultimately a strange beast. It often shows the limitations of low-budget cinema. Yet it also makes excellent use of its locations and profits from a surprisingly classy score by Joe Conlan. Would it be patronising to describe it as a persuasive calling card?

Video on demand from May 14th