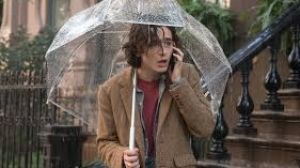 Timothée Chalamet can’t find a way into lines that should only exist in the mouth of a sexagenarian character in Woody Allen’s film. Photograph: Jessica Miglio/Perdido Productions

Over five decades and counting, Woody Allen has hosted dozens of Woody Allen stand-ins, from John Cusack to Kenneth Branagh to Larry David. At the risk of being dogpiled by Chalmaniacs, one would be hard-pressed to find a more unsuitable ersatz Allen than Timothée Chalamet.

It’s not that Chalamet isn’t a very capable young actor. He has the chops for the suffering of Beautiful Boy and the lightness to gleam from the corners of Ladybird. But even the Oscar-nominee can’t find a way into a slipshod script composed of lines that should only exist in the mouth of – let’s be kind – a sexagenarian character in a Woody Allen film. Chalamet’s contemporaries, Elle Fanning and Selena Gomez, fare even worse.

A Rainy Day in New York unfolds in Woody’s beloved Upper East Side among literary salon types who probably never existed outside the director’s milieu. Even in this affected, whimsical fantasy world – shot in a dusky pink that doffs a cap to Wes Anderson– it’s hard to account for twentysomethings using milquetoast as an insult.

In common with Anything Else – the filmmaker’s last attempt to get down with the kids - the youthful cultural references are anything but: “She’s fine if you like Grace Kelly” snorts one pre-med student, before criticising a film director for neglecting to work in “a single decent toilet joke”. Another female is compared with the late PLO chairman, Yasser Arafat. The popular Palestinian is as up-to-date as the screenplay gets.

It’s not just the allusions. A scene that takes place among ancient Egyptian artefacts leads one to marvel that the mummies don’t rail against the ancient joke at their expense: “These crazy Egyptians put all their money on the afterlife!”    “What I really need in a Berlin ballad,” smarts Chalamet’s Gatsby (again, anachronistically), a poker-playing boy wonder who, despite being a college student, is repeatedly, inexplicably pestered about his career plans.

When his midwestern girlfriend Ashleigh (Fanning) travels to New York to interview a tortured filmmaking artist (Liev Schreiber), Gatsby makes plans to show her around the city, while avoiding his socialite parents. Ashleigh, however, finds herself inappropriately detained by various older gentlemen, including Jude Law’s screenwriter and Diego Luna’s Latin heartthrob.

Ashleigh, the dumbest female screen character since Mira Sorvino played a hooker-with-a-heart in, well, Woody Allen’s Mighty Aphrodite, is contrasted with slick city gal Chan (Gomez). We say contrasted. No character is afforded much by way of development or traits. The great Cherry Jones pops up for several nanoseconds to drop a bombshell on her son, Gatsby, a revelation that makes absolutely no impact coming from a character we haven’t encountered before.    The one-liners are as flimsy as the story: “Time flies . . . yeah, unfortunately it flies coach.” The film will, however, have a place in history as a project Amazon chose to shelve as “unmarketable” and as a movie Chalamet and Gomez chose to denounce after the shoot, citing the 1992 sexual abuse allegation against the writer-director.

It’s not the worst Woody Allen picture – Cassandra’s Dream, Magic in the Moonlight, anyone? – but the familiar stomping ground only serves to remind of many better Woody Allen films. A damp old day, indeed.