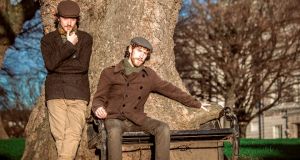 Concertina player Mary McNamara is the recipient of this award this year, for her profound contribution to the tradition, locally and nationally. Guests include Macalla, Mairéad Ní Mhaonaigh, Seosaimhín Ní Bheaglaoích, Catherine McEvoy, Peadar Ó Riada, Andrew McNamara and many others. Her collaborations with the late P Joe Hayes and Martin Hayes, as well as her diverse live session playing with the iconic fiddler Joe Ryan, fiddle/concertina player John Kelly and west-Kerry accordion player and singer Breanndán Begley serve as object lessons in how a musician can embed herself within the tradition with equal parts grace and curiosity. The glory of Mary McNamara’s musicianship is that you never know what’s around the next bend.

This four piece acapella harmony group features Ruth Clinton, Meabh Meir, Sinead Lynch and Lily Power. Having garnered laurels for their debut album, Bleaching Bones, released last year, this quartet are guests of Bray’s YARN storytelling festival, so expect a lively mix of stories and songs from the floor too.

Lorcán Mac Mathúna and Daire Bracken’s ground-breaking dance songs duo, Preab Meadar continue their tour where they collaborate with sean nós dancers Liam Scanlon and Caoimhe Ní Mhaolagáin, for an exhilarating performance of rhythm and rhyme, music and dance. Preab Meadar is a duo of voice and fiddle which uses the theory of medieval syllabic Irish poetry as the basis for their highly inventive music creation.

This week’s guests at one of Dublin’s longest running singing circles is Scottish singer, Byrne, who is known for his work with Scots folk band Malinky, celebrating their twentieth anniversary this year. He has worked on the Tobar an Dualchais / Kist o Riches sound archive project and on the papers of folklorist Hamish Henderson. Another example of the eclectic mix of singers who cross the threshold of An Góilín on a regular basis.

Fresh from their success at both the RTÉ Radio 1 & BBC Folk Awards, brothers, Brían and Diarmuid Mac Gloinn, aka Ye Vagabonds make their debut in the heart of the Cúil Aodha Gaeltacht. A chance to hear renditions of songs from their latest album, The Hare’s Lament.