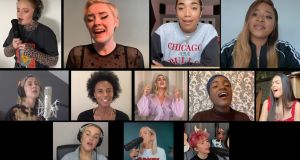 Women in Harmony covered Dreams to raise funds and awareness for Safe Ireland, a charity working with women and children experiencing domestic violence

Six months on from a report that showed a huge difference between the amount of radio play that male Irish artists get on stations around Ireland compared with the number of times songs by female Irish artists are played, the balance has improved only slightly in many cases.

Although a handful of stations have improved signifcantly, male performers still account for 80 or 90 per cent of radio play in a lot of instances, research to be released on Friday shows. One station broadcast no songs by female artists during the study period.

The half-yearly follow-up to the Gender Disparity Data Report on Irish radio, compiled by the Why Not Her? collective, outlines a continuing gender disparity among the 20 most-played songs by Irish artists on Irish stations between June 24th and December 24th, 2020.

Overall, 85 per cent of the artists in the top 100 Irish radio airplay chart over the past six months have been male; only 11 per cent have been female. (The remaining 4 per cent of songs have been collaborations between male and female artists.)

‘The findings are a staggering and shocking display of an industry model that still needs drastic changes, especially in regional radio. Variety and diversity exist. Let us all work to embrace that’

Among those to have shown the biggest improvements are RTÉ 2FM, Spin 1038 and Spin SouthWest, Beat102-103, LMFM and WLR FM, but the dominance of male artists is still striking.

“The same homogenised male list that we viewed in the last report – Picture This, Gavin James, Dermot Kennedy, Wild Youth, Niall Horan and a new addition to the male echelons of the Irish scene, Robert Grace – dominate the top five chart positions on radio, with only Denise Chaila and Wyvern Lingo appearing once in the top five most-played tracks across Irish radio, on RTÉ 2FM,” Why Not Her? observes of the data.

The 39-strong supergroup Irish Women in Harmony, who recorded a charity cover of the Cranberries song Dreams, appear multiple times but are outnumbered by mostly solo male acts.

Why Not Her? concludes: “The findings are a staggering and shocking display of an industry model that still needs drastic changes, especially in regional radio. Variety and diversity exist. Let us all work to embrace that.”

According to the report, which is based on data compiled by Radiomonitor, the stations playing the largest percentages of female Irish artists include:

For the first time in five years, the Dublin station FM104 increased women’s music in its top-20 airplay charts by 10 per cent, which the reports calls “a small but certainly significant change towards parity”.

At the opposite end of the scale, Tipp FM played no female Irish artists at all in the six-month sampling period (a decrease of 5 per cent since the previous study). Both C103 and 96FM, in Cork, played 95 per cent male Irish artists (no change in six months), as did KFM, East Coast FM and South East Radio.

The national station Today FM is among the broadcasters featuring 85 per cent male artists.

The report does show an increase in diversity, going from just one artist of colour – Soulé – the last time around to the 11 that have featured in airplay charts across Irish radio in the past six months. Denise Chaila’s song Chaila featured heavily. “To see a more diverse selection of artists is something we wish to acknowledge, as considerable progress and the beginning of more change to come.”

Gender disparity: Reaction to the report