Fiddler: A Miracle of Miracles – How a Jewish musical conquered the world

Review: Inside track on how Fiddler on the Roof became an unlikely cultural phenomenon 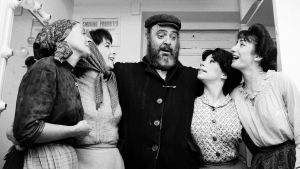 A heartfelt Biddy Biddy Bum to all those cinemas finding space for this lovely, engrossing documentary on an unlikely cultural phenomenon that helped close off the Broadway musical’s second golden age. There are no huge innovations in Max Lewkowicz’s consideration of Fiddler on the Roof. Some attractive animation by Tess Martin – nodding towards the Marc Chagall works that inspired both narrative and design – breaks up a lengthy series of talking heads. The tales they tell, however, will delight any fan of the genre. They may even win over a few unconvinced by musical theatre.

Unlikely scenarios – Taming of the Shrew, The King of Siam – were already common on the Great White Way when Jerry Bock and Sheldon Harnick elected to tackle Sholem Aleichem’s story about a Russian matchmaker and his rebellious daughters. But no previous hit had engaged so vigorously with a foreign culture. Not that foreign, of course. One of Miracle of Miracle’s themes is the show’s connection with the Jewish diaspora in the United States. This is stressed during a conversation of how director Jerome Robbins, suave Oscar-winner for West Side Story, got back in contact with the man he once was: Jerome Wilson Rabinowitz of Weehawken, New Jersey.

Yet the show ended up speaking to immigrant cultures throughout the world. We hear of one Asian audience member asking: “Do they get this in America? It’s just so Japanese.” A production in a largely African-American high school – enthusiastically approved by the creators – triggered initial hostility from the black and Jewish communities, but ended up being something of a triumph.

The film abounds with such yarns. We hear how Zero Mostel, the first lead, resented Robbins for naming names during the McCarthy era, but we also hear about the vicious pressure he was under and how he never forgave himself. All this to, of course, the strains of such immortal tunes as Matchmaker, Matchmaker and If I Were a Rich Man.

By the time Norman Jewison’s film came along, just five years after Fiddler’s debut, the Broadway musical was beginning to seem like yesterday’s genre. But that movie was also a smash and, deep into the new century, it allows us to hear Jewison (ponder that name) breaking the news to producers that he was a “goy” from Toronto. They pretended they knew all along.