Cannes diary: Tarantino gets an early lead in the dog days of this year’s festival 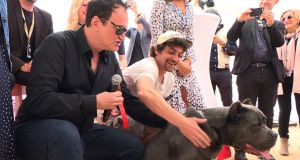 Shut out of the Palm Dog

To the Palm Dog! For the past 10 years or so, we have enjoyed reporting on this eccentric award – honouring the year’s best canine performances – as the last few films wind themselves up for presentation.

Arriving at much the same time as ever, we were told that the event was full and that, as we were not on some list, we would not be admitted. The man with the clipboard was unyielding.

It seem as if the incoming presence of Quentin Tarantino had altered the hitherto welcome-all spirit of the event. Tarantino was there to accept the main award on behalf of Brandy, Brad Pitt’s tough pit bull in Once Upon a Time . . . in Hollywood. “I have no idea if we are going to win the Palme d’Or,” he apparently said. “But I did feel I was in a good position to win the Palm Dog. I dedicate this to my actor Brandy.” He confessed that he was not passing the award onto its rightful owner. “I’m not going to give this to her – it’ll go on my mantelpiece,” he said.

Apparently everyone was very surprised when he arrived and there was much rocking back on collective heels. The actor Sally Philips was reportedly among those enjoying the ceremony by the beach. Nice for them all.

What will and what should win

The main awards are announced later today and, as ever, we make an undoubtedly futile attempt to predict what gong is going to what film. This is a mug’s game. There are exceptions – Haneke’s Amour in 2012, for instance – but, to employ a current comparison, the competition for the Palme d’Or is very much like the race for leader of the UK Conservative Party: it tends to go to an almost unnoticed outsider. In our predictions we are compromised by the eccentric rule that dictates that no acting prize can go the way of the Palme d’Or winner. This has led to us adding a parenthetical aside below. The big race looks to be between three films – Pain and Glory, Parasite and Portrait of a Lady on Fire, but the last time that happened – in 2015 – Jacques Audiard’s Dheepan came out of nowhere to take the title. So, who knows?

Will win: Pain and Glory

Will win: Portrait of a Lady on Fire

Should win: Pain and Glory

Will win: August Diehl for A Hidden Life (Antonio Banderas if Pain and Glory doesn’t get the Palme)

Should win: Antonio Banderas for Pain and Glory

Will win: Adèle Haenel for Portrait of a Lady on Fire

Should win: Katie Proctor for Sorry We Missed You

Sylvester Stallone arrived right at the end of Cannes for a “rendez-vous” during which he discussed his long career and the upcoming Rambo V: Last Blood (it really is called that). There were clues about the plot and the ambience.

“In the new one, he does come home, but in a way he never arrives. He’s there, but he’s not. That’s what the whole story is built around. As soon as he walks outside his door, he has no more control. The world controls you,” Stallone said.

“We pick it up, he’s out in this storm, a horrible storm. He’s trying to rescue people. There’s a flash flood. One guy goes up by horseback, he volunteers to save people. He’s still dealing with survivor guilt because he couldn’t save his friends in Vietnam. ”

I’m happy to relate that Stallone seems to have no truck with the current spoiler-phobia. He droned on for several minutes about the plot. “Rambo deals with the dark side of nature that most people live with. Rocky is different, he’s more the optimist,” he continued. “There’s optimism and pessimism in these two characters.” Of course, Rocky changed Stallone’s life to an impossible degree. Overnight, he went from being a striver to a player. “That’s how fast your life can change,” he said. “You can have 100 bad ideas to one very good one . . . All it takes is one good idea. Failures just make you smarter. Sometimes success makes you dumber.”

Sly also suggested a future Rocky project that might have something to do with immigration. “I have a great idea for Rocky. He finds this fellow who’s in the country illegally and it becomes a whole thing. It would be really phenomenal, really different,” he said.

We have known for some years that Bong Joon-ho, the Korean director of The Host and Snowpiercer, could turn his hand to almost anything, but the near-perfection of this competition entry still takes the breath away. For most of its duration, Parasite executes breakneck farce worthy of Fawlty Towers – careering schemes happening so fast you long for a pause button – but, as the third act grinds to a grim conclusion, the yawning social divisions cause the laughter to curdle into unease. It’s an extraordinary performance.

The film focuses on a handful of socially excluded chancers living in a “half-basement” on the wrong side of the tracks (think of them as a madder version of the family in Hirokazu Kore-eda’s Shoplifters, last year’s Palme d’Or winner, and you’re halfway there). When a grown son wrangles an unearned job as art teacher to a privileged teenager, his siblings and parents plot to dislodge the rest of the staff and perch themselves in the poshos’ suburban mansion. It goes right. Then it goes wrong. Then it goes peculiar.

Every element of the production purrs like a Rolls Royce. The actors play off each other with a mischievous energy that speaks of furious rehearsal. Jung Jae-il’s wonderful, abrasive score heightens the sense of spiralling urgency.

What really sets Parasite apart, however, is the socio-political silt swept beneath the racing comic stream. By the close you almost feel guilty for laughing so hard at the wretched con artists and their mad schemes.

It’s the best film in the main competition. Alas, no comedy has won (depending on your definition) for at least 25 years.

It Must Be Heaven

The key scene in the latest delightful comedy from Palestinian master Elia Suleiman sees the director – playing a wordless version of himself – listening patiently to a potential investor as he turns down his script. “Your film is not Palestinian enough,” the money man says. We take this to mean that it doesn’t deal explicitly enough with the region’s political tragedies.

Indeed, Suleiman rarely tackles those issues straight on. It Must Be Heaven is another of his gently absurd meanders through a series of loosely connected absurdities. Silent as Harpo or Mr Hulot, but more impassive than either, this version of Suleiman is having all sorts of problems. The neighbours are robbing his lemons. Sinister bodies roam the streets.

He elects to travel to Paris and then to New York, where he seeks to finance – I’m guessing – the film that we are currently watching. There are moments of genuine unease here. Before he leaves, he sees two police officers driving a car with a blindfolded girl in the back. For the most part, however, lower level anxiety rules. The film has much to do with pursuit. Everywhere he goes, people are chasing other people or things through weirdly deserted streets. A lecture in New York is attended by students in Halloween costumes.

That unease is universal, but, every now and then, It Must Be Heaven touches down on the specific to remind us where we began. “A film about peace in the Middle East?” a mogul says. “That’s funny already.”