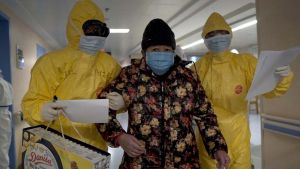 It will take a few years to identify the definitive study of the Covid-19 crisis, but, however long the adjudicators wait, this heart-stopping document is sure to figure as a contender. 76 Days, which deals with the initial lockdown in Wuhan, will be of professional interest to healthcare workers and public-policy strategists.

It is not for the rest of us to make semi-informed comparisons between the Chinese and Irish responses. Every upright human being will, however, respond to the exhausting personal tragedies that pile up over a breathlessly edited 90 minutes. Fear and panic are always close at hand, but the film never shows us uncontrolled chaos. Procedure is followed rigorously, but never so much as to exclude empathy.

We begin with a harrowing scene that sets the mood for what is to come. A nurse dressed in protective clothing hurries towards the room where  her father has just died. She breaks down cacophonously as the body, covered in plastic, is wheeled towards the lift. She is not allowed to touch him. She is not allowed to say an adjacent goodbye. “Screaming won’t do any good,” a colleague says.

It’s a chilling moment. But we soon realise that the staff’s dedication to reassuring the terrified is nearly as important as their commitment to healing the damaged bodies.

Aside from anything else, 76 Days is a remarkable logistical achievement. Hao Wu, a Chinese-American editor and director, never physically encountered Weixi Chen or his second anonymous co-director when those two were shooting footage in four hospitals at the start of last year.

The access is startling and occasionally disconcerting. As a mother, earlier diagnosed with Covid, finally encounters the baby from which she was temporarily separated, we get close enough to see a single tear run down her cheek. How on earth did they get into so many intimate nooks and crannies?

Frustrating any efforts to draw glib conclusions about managerial strategy, the film admits few statistics and listens to no explanations from senior boffins. Occasional blocks of text tell us the date and offer some information about the number of patients in the current hospital. There is no voiceover and no musical score.

Only a short while ago, the visuals would have suggested a science-fiction dystopia. We rarely see an uncovered face among the staff. Early on, as the virus really starts to bite, harried professionals fight to exclude patients massing outside the door. They are told all will be eventually admitted. Nothing we hear subsequently suggests this promise was not fulfilled.

No doubt abandoning a clutch of tragedies to the cutting room floor, the film-makers tease out a handful of captivating narratives: that mother, an elderly man in the early stages of dementia.

The masks and gowns make it harder to hook on to individual staff members, but endless awful details speak to their collective compassion. One brave woman phones the bereaved to inform them about surviving personal effects. Confirming that these are no jobsworths, another admits that, though it is against regulations, she will cut off a grandmother’s bracelet, disinfect it and send it to the family.

Not for the first time in a recent documentary, we are reminded that mobile phones are the era’s diary, identity tag and talisman. One chilling shot shows a phone ringing repeatedly for a late owner.

This extraordinary film includes some shots that remind us of the wider truth – an ambulance crosses an empty bridge in an apparently deserted metropolis – but, for the most part, the focus is on hard-working individuals connecting with their frayed compatriots.

It is a terrible story, but, in its constant discovery of bravery and compassion, ultimately a hopeful one. “You are all fearless soldiers,” an exiting patient declares. In most other contexts this would be sentimental flim-flam. Here it seems like the only fit description.

Video on demand from January 22nd