The final is on February 28th with the motion: ‘This house believes that the Irish criminal justice system is too weak on crime’ 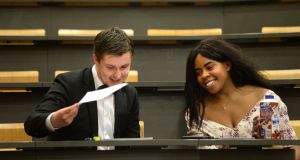 Irish students have always approached competitive debating in a slightly different way from the rest of the world. Our best speakers are gifted in combining facts and logic with wit and charm.

However, in recent years, there has been a drift towards a more international style. University debates increasingly reward a more impersonal approach, with many speakers placing the emphasis on beating their opponents rather than on trying to convince the audience.

That tendency was evident in several exchanges in the recent general election campaign, with some political leaders concentrating more on scoring political victories and creating viral soundbites rather than on engaging in constructive debate about policy.

As convenors this year, we have tried to ensure that The Irish Times competition continues to uphold the uniquely Irish style of debating. We have worked hard to build on the 60-year legacy of the competition by ensuring the motions before the competitors keep up with political, social and economic change and give them a chance to deploy all their skills.

Participants in the heats and semi-finals in recent months have discussed issues ranging from the morality of ecoterrorism to the recent controversy over State commemorations. Possibly the most heated debate was on the motion “This house would open up GAA grounds to other sports.”

Being able to watch the current crop of students so brilliantly engage with our debates, while also upholding the highest standards of rhetorical skill, has been incredibly rewarding, and is a great source of optimism for the future of Irish debating, both in universities and in society at large.

This year’s competition kicked off in October, with 162 third-level students bidding to be crowned champions.

Paired into teams of two, they faced off in the debating chambers of universities throughout the country, including Queens University Belfast, University College Cork, and University College Dublin. Four semi-finals, each producing one team and one individual winner, were held earlier this month to decide the finalists.

None of these debates would have been possible without the help of debating societies who agreed to host us, including the Literary & Debating Society in NUI Maynooth, the Solicitors Apprentice Debating Society of Ireland, and the Law Society in University College Cork.

The debates are judged by former winners and competitors who give up their afternoons and evenings without any financial reward. The competition truly relies on their fondness for the debate. We are eternally grateful for their time, and their help in choosing the best speakers from each debate, often an unenviable task.

The most difficult experience as a non-competitor is hearing the judges’ call and seeing the speakers’ reactions. Many are third- and fourth-year students, on their last chance to reach the final. For those who don’t make it, their only comfort is that others have been through the same before. For those who go through, the relief and joy at finally getting their chance in the final quickly turns to nervous anticipation.

The grand final will be held on Friday, February 28th at 7pm in the The Public Theatre, Trinity College Dublin. The motion is: “This house believes that the Irish criminal justice system is too weak on crime.” Speakers will compete for the Demosthenes Trophy for best team, and the Christina Murphy Memorial Trophy for best individual.

A spot on a month-long tour of the US for the three winning speakers acts as further incentive and serves to make the competition one of the most prestigious in the world.

We look forward to seeing who will make their mark on the long history of this incredible competition this year.