Youthful Liverpool too good for Everton, Borris-Ileigh into All-Ireland final 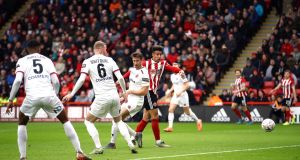 Everton remain without a win at Anfield since 1999, after they were beaten 1-0 by a youthful Liverpool side in the FA Cup third round yesterday evening. Carlo Ancelotti picked a strong XI for the trip across Stanley Park but the scale of the task facing him at Goodison was laid bare as a much-changed home team ran out comfortable winners - a second-half wonder goal from 18-year-old Curtis Jones proving the difference. Elsewhere Lucas Moura ensured Tottenham would be joining Liverpool in the hat for the fourth round, after his header gave Jose Mourinho’s side a 1-1 draw away to Championship Middlesbrough. Among the day’s other fixtures Chelsea beat Nottingham Forest 2-0 at Stamford Bridge, Derby County beat 10-man Crystal Palace 1-0 at Selhurst Park and West Ham won 2-0 at Gillingham. The draw for the fourth round will be made at 7.35pm this evening (BBC One) ahead of Arsenal’s clash with Leeds at the Emirates.

Borris-Ileigh are through to the All-Ireland club SHC final after they saw off St Thomas’ 1-21 to 1-14 in a thrilling clash in Limerick yesterday afternoon. The Tipperary champions led their Galway counterparts by two points heading into the final minute of normal time, before county star Brendan Maher weaved his magic and pulled his side clear - the 31-year-old ending the match with 0-10 to his name. Borris-Ileigh are into their first All-Ireland final since 1987 - their sole success - and defending champions Ballyhale Shamrocks now stand between them and a second title. Henry Shefflin’s side were to made to work for their victory over Ulster champions Slaughtneil yesterday afternoon, running out 2-24 to 2-19 winners after delivering a resilient display in Newry. Meanwhile Corofin are bidding for a third All-Ireland football title on the bounce after they beat Nemo Rangers 1-10 to 0-7 on Saturday. They will meet Kilcoo in the final, after the Down side beat Dublin’s Ballyboden St Enda’s 2-8 to 0-11.