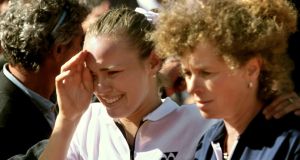 Martina Hingis of Switzerland cries as her mother and coach Melanie stands at her side after the final defeat to Steffi Graf. Photograph: Thomas Coex/AFP via Getty Images

Childhood sporting disappointments, from the mid 70s onwards, were shaped by being a Manchester United fan in a primary school class dominated by Liverpool supporters, the one glorious exception the 1977 FA Cup final, a triumph that represented a tiny oasis in a football landscape that would remain largely barren – there were other good days in the Cup – until the old First Division was rebranded as the Premier League.

The Triple Crowns of 1982 and 1985 provided an unexpected respite from the Ireland rugby team’s perennial struggles to avoid the wooden spoon in the Five Nations Championship. It would be a little while before expectation replaced hope as an overriding feeling. Rugby World Cups were filled with an unrequited longing when it came to the knockout games and occasionally even the pool stage.

The last ditch loss to New Zealand at the Aviva stadium in November 2013, was arguably the most deflating of Test match defeats given the nature of the end game.

Coming from a mongrel family background in GAA terms, Kerry and Dublin, was a little confusing as a child in choosing ‘the correct’ crepe paper hat on match day given the cajoling – blatant bribery informed several decisions – but irrespective of the winner, the landing was a little softer.

Once there’s skin in the game, emotionally, the result is an obvious tipping point. The nature of this job requires some professional detachment; levels of insouciance vary from press box to press box. Occasionally though it’s possible to be unwittingly sucked into caring about an outcome and one such moment was the 1999 French Open women’s singles final between Martina Hingis and Steffi Graf.

It pitted the 18-year-old world number one, Hingis, against the 30-year-old Graf, holder of 21 Grand Slam singles titles but who hadn’t contested a final in three years, largely due to the ravages of injury.

Graf would retire from professional tennis in August of that year but not before she engineered a triumph, her 22nd, she described afterwards as “the best moment of my career,” perhaps in recognition of becoming the first player, male or female, to beat the number one [Hingis], two [Monica Seles] and three [Lindsay Davenport] seeds en route to winning a Slam in singles in the Open era.

Hingis claimed the junior French Open at 12, the first of her five singles Grand Slams at the 2007 Australian Open aged 16 – she won three of the four that year, her only failing a surprise defeat to Iva Majoli at Roland Garros when she was a little short of match fitness following a horse riding accident – and later that summer became the youngest Wimbledon singles champion since Lottie Dod in 1887.

The previous year at 15 she triumphed alongside Helena Sukova in the women’s doubles at the All England club, a landmark that made her the youngest ever winner of any Grand Slam title. She would be the world number one for a staggering 209 weeks, her tennis a composite of technical brilliance and mental acuity.

Precocious on court, she was forthright in expressing herself off it, occasionally ill judged, like when describing French player Amélie Mauresmo, who she had beaten in the Australian Open final earlier in the year as “half a man,” or suggesting that tennis had evolved into a faster more athletic game than the era in which Graf had dominated.

Roland Garros offers a vibrant, colourful and noisy backdrop to the tennis from the red clay to the spectators’ indifference to regulations, principally those governing alcohol and the use of mobile phones. Umpires adopt a largely laissez-faire attitude when it comes to crowd control, quickly realising the futility of asking for ‘un peu de silence, s’il vous plait’ and expecting compliance. From experience French sporting crowds are non conformist by inclination.

A majority of the 16,000 that squeezed into Court Central for the final initially appeared to prefer the grace of a five-time French Open champion, hoping to enjoy a last hurrah, to the hubris of youth. By the time the match finished the scorn and derision heaped upon Hingis from the stands made for an ugly backstop.

Looking out from the press box and watching adults loudly boo and scream insults at a teenager who had suffered a complete emotional and physical meltdown, prompting her to run crying from the court cast a pall over an occasion that should have been exclusively devoted to Graf’s remarkable comeback and brilliant victory.

Hingis was partially complicit in attracting the displeasure of the crowd by dint of several tantrums but had become so unhinged that on Graf’s first match point, she served underarm, a window into her torment and muddled thinking.

It couldn’t have been further removed from the first hour of the final with Hingis leading 6-4 and 2-0 when she queried a call on a forehand was adjudged long on the first point of the next game. The umpire, Anne Lasserre, came down from her chair, inspected the mark and confirmed the point in Graf’s favour.

It should have been the end of the matter but Hingis persisted in arguing and then broke the rules by walking round to the other side of the net, pointing to a different mark, a course of action that is prohibited and one for which she would eventually cough up a penalty point for her territorial transgression.

She then returned to her chair and refused to budge and it was only the arrival of tournament referee Gilbert Ysern and the threat of disqualification that persuaded her to resume. It was a cue for open hostility from the onlookers in the stands. The Swiss player did serve for the match at 5-4 but couldn’t convert the opportunity, eventually losing the set 7-5 chants of ‘Steffi, Steffi, Steffi,’ ringing in her ears.

She disappeared briefly to change her attire, returning to still more catcalling and booing which was replaced by cheering when she received a warning for breaking a racquet and again when having another spurious argument dismissed. Only once did Graf lose her patience when, exasperated, she ventured: “are we playing tennis or just talking a little bit?”

Hingis should have conducted herself in a more reasonable fashion but at 18 and despite, or perhaps because, of her success possessed an immaturity common in many teenagers when confronted by authority, blighted further by arrogance. Still she did not deserve the unbridled baiting. In taking the third set 6-2 Graf ruthlessly capitalised on her opponent’s emotional breakdown.

Scurrying from the court in tears, Hingis would not have returned but for the insistence of her mother and coach Melanie, upon whose shoulder she sobbed during the ceremony. She confirmed as much afterwards: “If my mother wasn’t there I wouldn’t have gone back. Come on would you go out there if everyone boos you out?”

Hingis was never subsequently able to fully explain her behaviour that afternoon. The closest she came was in saying: “I think I lost my mind. There was so much pressure and I really wanted to beat her and win the title.” Overnight the headlines changed from ‘Swiss can’t miss,’ to ‘Swiss miss can’t’ in describing her Grand Slam fortunes.

She never won another singles Grand Slam title and retired for the first time, aged 22, in 2003, again in 2007 when she called a press conference to announce that she was under investigation for testing positive for benzoylecgonine, a metabolite of cocaine, during a urine test taken by players at Wimbledon, before attempting a third comeback in 2013.

Hingis, now 39, always was a brilliant doubles player to supplement her singles process, winning 20 Grand Slam titles combined in women’s and mixed doubles, half of those coming between 2015 and 2017; the latter the year in which she retired for a final time.

Who knows how many Grand Slam singles titles she might have gone on to win – for the most part she had the measure of the power hitters, the Williams sisters, Venus and Serena, Monica Seles and Lindsay Davenport at that time – had she triumphed against Graf? But what can be said is that few teenage girls have been subjected to that level of vitriol in professional sport.

A final footnote to the 1999 French Open tennis championships provided a happier outcome on a personal level. A 35-minute walk from the cafe under the Court Suzanne Lenglen at Roland Garros, where I had watched the first half, to my hotel miraculously transformed Man Utd from beaten dockets to Champions League winners.

Seán Moran: Will a silent, empty Hill help to loosen Dublin’s grip on Sam? 06:00
Dave Heffernan delighted to have banished bad memory of his first cap 06:00
Cillian O’Connor rejuvenated and eager to resume Mayo’s quest for glory 06:00
Cork City expected to approve €1 takeover by Preston owner 06:00
Conor McKenna feeling very much at home back in a Tyrone shirt 06:00
Here is your handy guide to sport on television this week