Women’s sport gets the conversation started on pelvic health 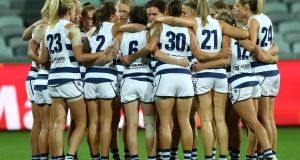 Exercising and being physically active have long been prescribed for improved mental and physical health. Staying active for all genders, ages and abilities is irrefutably important, and is often cited as a natural remedy for period pain. But how can you run, jump, and compete if you are bent over with endometriosis, a painful disorder that causes tissue to grow outside of your uterus? How can you win medals, trophies and represent your country if you can’t even get out of bed?

For the Australian Football League team, the Geelong Cats, the first step is to talk about it. In early March, they embarked on an ambitious project: get their players to discuss their pelvic health. The team received an endometriosis education session with Talking Endo, and following this, decided to don yellow shoelaces for their game against North Melbourne, in order to raise awareness about the condition which affects one in 10 women worldwide. An endometrium sculpture, by artist Bec Van Dyk, was displayed in their club, with both artist and EndoHelp representatives available to discuss endometriosis with game attendees.

Unfortunately, this proactive attitude towards athletes and their pelvic health is the exception rather than the rule. The primary way to diagnose early stage endometriosis is through a laparoscopy, a keyhole daycare procedure, more invasive than an ultrasound scan, which can detect advanced stage endometriosis. As a result, doctors can be slow to identify it, wanting to avoid invasive treatment for patients. This has the lamentable consequence of women feeling as they aren’t believed, and that their health isn’t being taken seriously.

This was the case for Elinor Barker, a British Olympian, who almost quit cycling due to the pain, fatigue and fainting episodes she experienced from endometriosis. In an interview with BBC in 2019, she revealed that 18 months before the 2016 Olympics, she had her doubts about her intense pain but it wasn’t until 2018 that endometriosis was raised as a possibility.

This ‘wait and see’ approach to athletes at any level who are suffering from symptoms means the solution is delayed, the pain extended and the quality of life diminished. Undiagnosed conditions progress from mild to moderate to severe, explains Dr Edgar V Mocanu, a subspecialist in reproductive medicine and surgery at RCSI.

The consequences are far-reaching, he warns, “life becomes miserable, relationships break, depression settles in”. It also means that incorrect treatments are prescribed, leaving women suffering, and with little options but to plough ahead, regardless of the pain.

Australian Olympian Emily Seebohm, in an article with the Guardian in 2017, revealed that her remedy was to battle through her symptoms – back pain, stomach aches, mood swings and sugar cravings. There were days, she said, “when I felt so sick that I didn’t want to go to training. To be at the level I’m at, I had to go to training every day, so that was the battle I was having within myself, but you have to push through it.”

But if those at the top of their game, who use their body everyday in a professional context, can’t get adequate help for the pain, what hope is there for women without a team of experts behind them?

For Jessica Davies, an assistant manager at Newpark School Sports Centre in  Blackrock, Co Dublin, her initial mode of treatment was to endure it as best as possible: “I’m very strong willed so for most of it I dug my heels in and kept going” but often she had to concede to the days where being “curled up in a ball was sometimes the only solution and college was missed, later work was missed and lots of painkillers were consumed.”

Davies – who had initially been incorrectly diagnosed with IBS and prescribed ‘more fibre’ as a solution – tried everything: the contraceptive pill; Provera tablets; Chinese herbs and counselling; contraceptive injections and eventually, laparoscopic procedures and a hysteroscopy. Having been a competitive gymnast throughout her teens, Davies continued playing sport, unknowingly pursuing the same method of alleviation as professional athletes.

“I kept up my sport the whole time. I think keeping up the sport helped me a lot, even though I would be doubled over some days. I have a very stubborn competitive streak.”

For those, like Davies, who are serious about sport but feel that endometriosis may hold them back, Dr Mocanu advises that having a “clear diagnosis and surgical therapy at diagnosis followed by period suppressing therapy” is essential, but to remember that “the disease can be controlled to a certain degree albeit multiple interventions might be required throughout life.”

Initiatives like the Geelong Cats’ are the “key”, says Dr Mocanu, “many young girls suffer from undiagnosed endometriosis and they believe that painful and debilitating menses are normal. They never seek advice, nor are they encouraged to seek advice. I personally believe a school campaign should also be put in place to create awareness and early detection . . . The sooner the diagnosis and surgical/medical therapy the longer the progression can be delayed.”

Progress is slow. It is only in recent years that menstrual health has been on the radar for professional teams and sporting bodies from the RFU in the UK to the US women’s national soccer team, and most recently, Chelsea, but with initiatives like the Geelong Cats’ it is – hopefully – only a matter of time before Irish teams and schools have the education and interest in doing for their athletes what the Geelong Cats management team have done for theirs, and in the process, improving the lives and health of Irish women and girls.