Joanne O’Riordan: Ireland can learn a lesson in how to chip way at gender equality 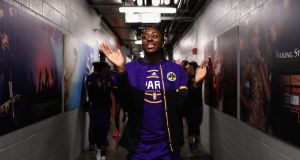 Women’s sport is on a high now. Reflecting on progressive steps made is always essential on International Women’s Day, when issues solely dedicated to one group are at the forefront for one whole day. International Women’s Day 2020’s slogan was Each For Equal, basically saying that each of us can create an equal world. As I sat and read through the sports pages, several things jumped out at me.

Firstly, seeing how far a small – that is, in terms of European viewers and fans – sport such as basketball can grow if the correct people are at the negotiating table. As long as all negotiating parties strive for a win-win scenario, both sides can drive change and improve standards for all teams.

Having seen the WNBA and WNBA Players Association (WNBPA) negotiate a brand new and improved collective bargaining agreement (CBA), the win-win situation reached sets a precedent for female athletes, as a team and as individuals, everywhere. The WNBA’s ground-breaking eight-year CBA approved in January not only significantly increases pay for players, but also includes higher travel standards, child care and support, and maternity and family benefits, essentials that are lacking in other sports.

All-Star Skylar Diggins-Smith, who missed the 2019 WNBA season after having a child, has been outspoken about the conditions for working mothers who are players

But, it certainly did not come easy. Take Terri Jackson as an example. Terri Jackson is the executive director of the WNBPA and has played a vital role in drawing up a fair and equal CBA. Her previous experiences as legal counsel for athletics for the University of the District of Columbia and NCAA’s Director of law, policy and governance helped prepare her for the negotiations with WNBA owners and WNBA commissioner Cathy Engelbert.

Some of the most recognisable names in the WNBA started a public campaign against owners and the WNBA. For example, All-Star Skylar Diggins-Smith, who missed the 2019 WNBA season after having a child, has been outspoken about the conditions for working mothers who are players while Liz Cambage, one of the most well-known players, has spoken out about how the salaries of players needed improvement.

The new CBA settles some of those issues as “players will receive a full salary while on maternity leave, an annual child care stipend of $5,000, and guarantee of two-bedroom apartments for players with children” and the annual base pay for league’s highest-paid player jumps from $117,500 to $215,000.

And finally, every good team needs a president. WNBPA executive committee president Nneka Ogwumike is one of the WNBA’s most prominent players, as a former champion and MVP. Her time as a former Stanford student and leader both on and off the basketball court have shown her to be a competent president and campaigner. As a current player, Ogwumike knew the importance of negotiating improvements in many areas, including hotel accommodations and flights. Under the new CBA, players will fly commercial, in an upgraded economy-class. They will now have individual hotel rooms instead of sharing rooms, while players with children will now have two-bedroom apartments.

Club and underage women’s Gaelic football is still a bit of a mess due to administration and scheduling issues, deterring young talent

As the new CBA kicks in, it is also essential to reflect on sports which have not made progress and also to look at teams who are not in any way close to any form of equal parity. If we look at Ireland, we can see a rise in popularity for big, mainstream games, such as football and camogie finals, international soccer , hockey and rugby games.

However, at a deeper grassroot level, teams and clubs are still struggling. Club and underage women’s Gaelic football is still a bit of a mess due to administration and scheduling issues, deterring young talent. As other sports become numbers fixated and aspire to reach targets for finals, very little is actually done to entice fans at a local and more consistent level. Whether that’s down to access, limited resources and lack of information is one thing, but one thing is guaranteed, and that is women’s sports won’t thrive and reach its potential unless consistency appears across all levels, not just big finals or major tournaments.

The women’s side is growing at a rate probably faster than men’s, mainly because men’s sport is already peaking, and with ticket prices increasing and inaccessibility financially turning fans off, the women’s game is the most obvious resort.

Women in Ireland have accumulated more medals than men at many tournaments. The next couple of years and decades will show who and what is invested. Supporting women’s sports should no longer be a fad or the in thing. In fact, in time, the women in women’s sports will soon disappear.

Until then, instead of support for one day, maybe chipping away for equality throughout the other 364 days will make a more significant impact.