Why can't we buy an Ireland women’s rugby jersey?

Issue remains widespread across sport but some teams have made progress 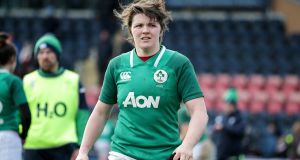 In February 2019, a record 4,637 people attended the Ireland England Women’s Six Nations game in Donnybrook. Despite the disappointing score and the English victory, there was a palpable sense of momentum, knowing that there were more eyes on them than ever before. Undoubtedly, the team’s popularity has grown since then, alongside the growth of the women’s game, the 20x20 movement and well-known individuals like Sene Naoupu, Fiona Coughlan and Eimear Considine.

Although the Irish crowd rooted for the team, feeling like an extension of the squad, not one of those attending was in possession of the same jersey as the players, unable to buy it anywhere.

The most common way for fans to show allegiance and feel personally connected to a team is to wear the same jersey as the players. However, for fans of the Irish women’s rugby team, this simply isn’t an option.

The Irish women’s rugby jersey, sponsored by AON, a global professional services firm, doesn’t hang in shops, or feature in life-size window fronts, or even appear on the IRFU website, whose customer service team “apologise for any disappointment this may cause”. It actually cannot be bought, and as reported in The Telegraph earlier this year, the IRFU supplied the women’s internationals with “just two jerseys for the duration of the tournament while the men receive two per match.”

Trends in the sector

Stephen McNamara, the IRFU Director of Communications, in response to a request for a comment said: “The IRFU license the production of replica playing and training kit to Canterbury of New Zealand who, based on retailer demand, alongside trends in the sector and in the market place, select what jersey and training offerings to make available to the public. At present the Women’s National team jersey is not in retail. This is something that Canterbury review and audit on an ongoing basis annually in line with their planned retail collection. Jersey sales can provide vital revenue streams to the game and it is hoped that the significant increase in interest in our women’s team will grow to the point where demand for this variation of the product increases. There are a wide variety of women’s styles available in Irish jerseys and training wear both in retail stores and online.”

Vodafone’s TV ad aired during the men’s Six Nations proclaimed that they were a #TeamofUs, depicting a range of people asking “are you in?” This included women as fans of the men’s game. In this context, ‘us’ applies solely to the men’s game, unintentionally rendering the women’s team as alternative. Not one of us, but “them”. Similarly to Vodafone, the IRFU supports female fans of rugby, as long as they are investing in the already-lucrative men’s game. Like the ads, the team of us evidently applies to female fans of the men’s game, apparently not extending to include the international women’s team or their supporters.

For AON, their investment is seen on a total of 15 jerseys, which are worn in the limited number of matches the women have, feature on the individual team member’s social media pages and are occasionally gifted by players. As a New York Times article said about women’s soccer jerseys prior to the 2019 World Cup: “Clothes are also the easiest way for fans to assert their own allegiance, aspiration and personal connection.”

Not having the option to buy jerseys means you can’t gauge market demand, can’t enable fans to imagine they could be one of them some day, can’t feel part of something bigger than yourself, and ultimately can’t actually invest in a team’s growth.

It is not correlative, but investing in jerseys and the accessibility of them means investing in your teams. Leinster, the three-time Interpro champions, women’s team’s jersey is available online, retailing at the same price as the men’s (€40 at the time of writing) as is Munster’s, where a unisex jersey is available online (€40). For Connacht (€37.50) and Ulster jerseys (€45) you are once again passed on to the women’s fit of the men’s.

This is not solely a rugby problem, but other sporting bodies seem quicker to react, more likely to change. Kit was the straw that broke the camel’s back for the Irish women’s soccer team in 2017, who threatened to strike after revealing the poor treatment they’d received at the hands of the FAI including sharing their kit with the underage teams, changing in bathrooms, and ill-fitting gear. Last year, the latest soccer jerseys were unveiled in a photoshoot with the captains on both teams in the same jersey, sponsored by 3 Ireland. The team are currently top of Group I and hoping to qualify for their first major tournament, Euro 2021. Across the 32 counties, online shopping can prove fruitful for half of the counties, including the likes of Dublin, Galway and Kerry when searching for LGFA and/or camogie jerseys.

In the context of sports progress it is, perhaps, not the most fundamental issue, but it is indicative of what is required of female athletes: they have to not only be elite athletes but must represent so as to deserve jerseys. Irish rugby’s women’s teams have given back to their loyal fan base, winning the Grand Slam in 2013, hosting the Women’s World Cup in 2017, and returning with a vengeance to the 2020 Women’s Six Nations, but there has – to date – been no capitalising on the momentum, victory and media of these events.

Until the players look out to the stands at Donnybrook, Murrayfield or Twickenham and see Aon jerseys, until potential sponsors can see it as a worthy investment, and until fans can buy a jersey without it becoming a question of the worthiness of women’s sport, the Irish women’s rugby team will remain a “Team of Them” and the men the “Team of Us”.