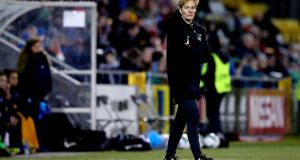 Vera Pauw: We have created a schedule for all of the teams in our group. One that we think is the best for us all.” Photograph: Ryan Byrne/Inpho

Vera Pauw believes that the way the football calendar was rewritten in recent weeks only serves to underline the second class status of the women’s game.

But the Irish team coach sees little point in dwelling on the issue as she looks towards getting the remainder of her side’s European Championship qualification schedule played.

The 57-year-old from Amsterdggam, who is close to signing a contract extension that will secure her position until the summer of 2022, is hoping the remaining three group games can be played over the course of this autumn and says a new programme of friendlies is being weighed up so as to prepare the team again after such a long lay-off.

“But we need to be used to that. Women’s sport in general is always put in second place. Even the fact that the men’s tournament was put into the time slot for our tournament without even any discussion with the stakeholders . . . that says in itself that women’s sport needs to adapt to men’s sport. But that is not just in football.

“We need to show every time that it is not the way that it should be. But so far, it is the case so we can jump up and down. But at the same time we do have clarity. I hope that there are really good reasons why it only came so late and probably there will be a moment when we hear that. But let’s not fight that, let’s just focus on the fact that women’s sport is fantastic to watch, fantastic to do and if you see it then it is something young girls can aspire to.

“Uefa has promised that the women’s game will not suffer,” says the former Netherlands international who says the long lay-off is being used by the FAI to work on improvements to the player development pathway in Ireland.

“Only time will tell. We saw with the earlier crisis, the bank crisis, we saw that women’s game did suffer but so too did the men’s game.

“And look at the losses that football is suffering now. I don’t know about in Ireland but in the Netherlands, the prediction is that it will be €400 million in the men’s game so surely there will be an effect on the women’s game. But if we can ensure that all of the leagues and games can be played then that is the biggest win that we can get.”

Pauw does not seem to see the delays having any great impact on Ireland’s hopes of qualification. The team had won a couple of key games in March to establish themselves as the only obvious rivals to Germany in a group they currently lead by a point with one game more played.

The two teams have yet to face each other, however, with the first of the scheduled encounters, away in April, having been postponed already and doubts about the one pencilled in for Tallaght on September 22nd.

The crowds will come, she believes, if they are allowed to, whenever that game happens and in the meantime, she suggests, “perhaps some of our players can get healthy again”. The rest, she insists, she and her players will adapt to as required.

“We have created a schedule for all of the teams in our group,” she says. “One that we think is the best for us all; it is not just about us but about fighting for a fair competition because together I think that that is what you need to do and it is almost ratified.

“If that is the case then we have already a few countries that we would like to play [in friendlies] and that is different to Serbia [who Ireland had been scheduled to play in a friendly, since postponed] because at that point we would need to be prepare to take the points and Serbia was more about seeing the other players playing, the ones who I hadn’t seen in an international game.”

The international programme is, however, tied up with the resumption of club football with Pauw needing her players to be back in competitive action if they are to have any chance progressing.