Three changes for Ireland women as they face down Wales 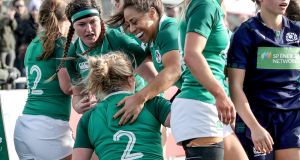 Ireland women’s coach Adam Griggs has made three changes to the team that beat Scotland last week as they face into their second Six Nations encounter with Wales.

Fit again, Eimear Considine makes her first appearance of the tournament. She is named at full back with Lauren Delaney moving to the wing to partner Beibhinn Parsons.

There is no change to the centre partnership with Michelle Claffey and Sene Naoupu named at 12 and 13 respectively.

There is no change to the front row with Clíodhna Moloney named at hooker and joined by Lindsay Peat and Linda Djougang.

Judy Bobbett, who makes her Six Nations debut, is named in the second row alongside Aoife McDermott.

Speaking on the team selection, coach Adam Griggs said “it was great to start the campaign with a win. We started the game against Scotland well, but we have areas to work on for this weekend.

“Wales are a familiar side, we played them in November, and we lost to them in the final minutes of that game. We know how strong they are and where the threats are.

“I’ve no doubt they will be looking for a result on Sunday. If we get the small things right, I am confident we can come out on the right side.”

Tickets for Ireland game v Wales are available on Ticketmaster.ie and will be available from the gate on the day.