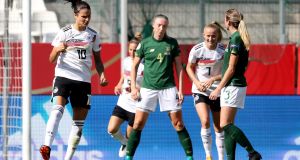 Germany got the job done in the first half against the Republic of Ireland to grasp top spot in the women’s European Championship qualifying group.

Ranked second in the world behind USA, Germany were predictably the superior force in Essen but Vera Pauw’s side travel to Ukraine next month relieved for having avoided the sort of humiliation inflicted on Ukraine, Montenegro and Greece by Europe’s best team.

Marina Hegering’s eight-minute header was followed by two more goals approaching the break from Dzsenifer Marozsan and Lea Schüller, but Ireland managed to keep them scoreless for the second half.

That will do wonders for their belief ahead of the trip to Kiev on October 23rd, when a draw will at least secure a play-off chance at reaching the 2022 finals in England.

Even without Sara Doorsoun and Almuth Schult, Germany manager Martina Voss-Tecklenburg could include four members from Champions League finalists VfL Wolfsburg in her starting team.

Openings were always going to be scarce for Ireland but they were made to rue missing one on six minutes before the hosts took control.

Leanne Kiernan’s pace on the counter-attack led to a corner from which Katie McCabe picked out Diane Caldwell, who could only get her shoulder, rather than head, on the delivery.

A corner at the other end moments later saw Germany power ahead. Hegering read Marozsan’s delivery perfectly to peel off Louise Quinn and guide her bullet header inside the near post.

Quinn had the chance to atone within two minutes by rising to meet Megan Connolly’s corner, yet couldn’t keep her header down.

Germany’s power soon began to tell, as Schüller was left unmarked to drag a shot past the near post. Alexandra Popp twice went close to adding to her 53-goal haul at international level, smashing a free-kick which Hourihan held before nodding wide from a corner.

Hourihan was alert again to prevent Connolly scoring an own-goal past her and Ireland survived another scare when the unattended Giulia Gwinn scuffed her close-range shot.

Operating on the break was Ireland’s best hope, outside of set-pieces, and Kiernan missed a great opportunity of releasing Rianna Jarrett on 35 minutes.

“That was a great chance at a crucial stage of the game,” lamented Pauw afterwards.

It could have proved a turning point as Germany soon after struck twice in three minutes to kill off the tie.

Kathrin Hendrich began the move for the second goal on 38 minutes, cutting inside to find Marozsan.

The Lyon midfielder still had plenty to do but a swift exchange of passes with Chelsea’s Melanie Leupolz on the edge of the box produced a sight at goal which she gleefully profited on with a left-footed curler into the top corner.

If that goal wasn’t preventable, the third shortly afterwards certainly was.

When Ireland only half-cleared a left-wing cross, Schüller was left alone 10 yards out to slice her volley in off the post.

Ireland’s goalkeeper then produced a splendid stop with her legs from Popp to avoid further damage heading into the break.

The visitors settled in the second half but were lucky that Germany didn’t punish loose back-passes from Áine O’Gorman and Kiernan. Germany were overall far more composed in possession and goalkeeper Merle Frohms got through another half without being troubled, illustrating the gulf in quality Pauw stressed during all of her pre-match musings.