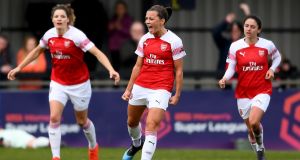 While the remarkable influx of world stars to the Super League over the past couple of months has been a thrilling development for the club game in England, it might well have reached a point for Republic of Ireland manager Vera Pauw when the closure of the transfer window couldn’t come soon enough.

While all 12 clubs have brought in a raft of new players, either on loan or in permanent deals, among the big name arrivals were five of the United States squad that won the 2019 World Cup – Alex Morgan (Spurs), Rose Lavelle, Sam Mewis (both Manchester City), Tobin Heath and Christen Press (both Manchester United) – as well as Pernille Harder (Chelsea), Lucy Bronze (Manchester City) and Valerie Gauvin (Everton). And with the likes of Sam Kerr (Chelsea) and Vivianne Miedema (Arsenal) already with English clubs, that reads like a Who’s Who of women’s football.

Little wonder then that the league has sealed new broadcasting deals with channels in the United States, Germany and Italy, adding to existing contracts in Scandinavia, Canada, Central America and Australia.

If you resisted pulling on the green jersey while reading through those names, you’d just relish the opportunity to see these players in club action this season, but Pauw will surely wonder about the impact of the wider influx on those who literally don the green jersey.

While she included five home-based players in her squad, three from German clubs, and one each who play their football in Portugal, Italy, Denmark and the United States, 11 of the group currently in Germany preparing for today’s European qualifier in Essen play in England. Seven of those are with Super League clubs, while three more who play in the English top flight missed out on selection this time.

Of that group of 10, just three started both their side’s opening two league games – Megan Connolly at Brighton, Harriet Scott at Birmingham and goalkeeper Grace Moloney at Reading.

There are a few positive buts here. Denise O’Sullivan, who came on as a substitute to make her debut for Brighton last weekend, having joined the club on loan from North Carolina Courage, is likely to see plenty more game time, such is her quality.

The same goes for Katie McCabe at Arsenal. She missed their opening fixture through suspension, but while she was only on the bench for their second game, she made such an impact when she came on, her precision crosses from the left making two goals for Jill Roord, she may well be back in that starting XI soon enough. And up at Manchester City, both Megan Campbell and Tyler Toland are recovering from injuries, so were unavailable for selection.

But after City’s shopping spree, adding to a squad already brimming over with talent, both Campbell and Toland could struggle to break in to the side this season. The prospects of Campbell, currently on the comeback trail after surgery on her left foot, is not helped by the signing of two world class full backs in Bronze and Greenwood.

Toland, still only 19, lost her place in the Irish squad last season after limited chances at City, prompting Pauw to urge her to consider a loan move. But she remains at the club.

Down at West Ham, meanwhile, Australian international goalkeeper Mackenzie Arnold was among their eight signings this summer, and has since ousted Courtney Brosnan, who started Ireland’s last European qualifier back in March, from the team.

Her club-mate Leanne Kiernan could also have a battle on her hands, the 21-year-old from Cavan replaced in the starting line-up last weekend by loan signing Rachel Daly, an England international. Another Republic of Ireland forward, Ruesha Littlejohn, was released by the club during the summer, since joining Leicester City in the second-tier Championship.

And another of Pauw’s strikers, Rianna Jarrett, while highly regarded by her Brighton manager Hope Powell, could probably have done without the arrival on loan from Manchester City of South Korea international Lee Geum-min.

Pauw has repeatedly stressed the importance of regular game-time for her players, touching on the issue again back in August when she named her squad for the German game. “If you aren’t playing regularly, you cannot perform at your very top level despite everything you are doing repeatedly in training,” she told ExtraTime.ie.

“Just going abroad for the sake of trying something different is not always a step forward. When you go to a huge league and you are on the bench and you never really play, that does not help you to develop as a player. You have to play.”

If the Super League continues to take much the same path as the Premier League, bringing in a host of talent from outside Britain and Ireland, and if that results in fewer playing opportunities for her players, Pauw would, then, prefer them to take a different route. Louise Quinn, for example, had restricted playing time with Arsenal last season, so after being released by the club joined Fiorentina in the Italian league.

Things could get even stickier next season when a quota, similar to the one already enforced in the Premier League, will be introduced. Super League clubs will have to have a minimum of eight homegrown players in their 25-strong squads, while in the Championship, where four of Pauw’s squad currently play, the figure will be even higher, 60 per cent of each squad having to be homegrown.

This is a response to English concerns about the number of foreign players being signed, and the likely limiting of opportunities for their own young talent. By the BBC’s calculations, just 23 of the 73 new Super League signings by the close of the window were English, 20 other nationalities making up the rest – including two from Ireland, O’Sullivan and Connolly.

It’s early days and, hopefully, Pauw’s Super League contingent will hold their own this season as she attempts to lead the national team to its first ever qualification for a major tournament. But if they’re spending more time on the bench than on the pitch, she would, no doubt, want them to seek pastures new.