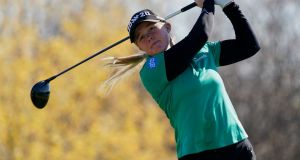 It was in October of last year that Stephanie Meadow produced one of the more gutsy sporting moments of 2019. She had gone in to a tournament in Texas in 112th place on the LPGA Tour money list, needing to finish in the top 100 to hold on to her card. And she was faced with a 25 putt on the final hole to save it. She sank it, and finished 99th on that list. “Anxiety central,” she said of the experience.

But thanks to her form since the Tour resumed in July, Meadow’s 2020 will conclude in a decidedly less anxious manner. In the 11 tournaments since then, she’s made the cut in nine, finding a level of consistency that she struggled to reach the previous year.

The highlight of her season to date came in Florida last month when she matched her best ever finish in a professional event, third at the 2014 US Open, with a sparkling final round of 69 at the Pelican Women’s Championship which was won by South Korea’s Sei Young Kim, the world number two.

That placing earned the 28-year-old Antrim woman a cheque for $101,250, lifting her from 59th to 35th on the money list and securing a place in the end-of-season Tour Championship for which only the top 60 qualify. That event (December 17th to 20th), which also takes place in Florida, has a purse of $5 million, with the winner collecting $1.5 million, the richest prize in women’s golf.

“I putted great - I made everything I looked at,” she told the BBC. “I went back to an old putter three, four weeks ago just sitting in the garage. I’ve had more confidence. I stroke much better and I love the feel of it. That really turned things around. It’s just really nice to have a good finish this year. I’ve had so many consistent finishes, around the 30th-40th mark and making a lot of cuts.”

That trusty old putter could yet find itself at the Olympic Games next summer, where Meadow is due to represent Ireland along with Leona Maguire, just as they did in Rio, while a spot on the European team that will compete at the Solheim Cup in Ohio soon after Tokyo is also on her radar.

After a tough few years, when she struggled following the death of her father and, later, was afflicted by back problems, Meadow will take plenty of confidence from her form in 2020 in to the year ahead.