Sonia O’Sullivan: Recognising the true importance of the sports awards 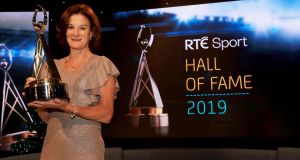 Sonia O’Sullivan at the RTÉ Sport’s Awards this year where she won the Sport Hall of Fame award. Photograph: Donall Farmer

I was at the RTÉ Sport Awards last Saturday night with my old friend David Matthews, still the Irish record holder over 800 metres, sitting around a table alongside Sanita Puspure and a few of the Dublin footballers.

It’s always a little awkward when you’re chatting away and can’t quite put a name to the face. Sanita, a double World rowing champion in the single scull, we did know but I had to quietly nudge David to remind me who exactly the Dublin footballers were.

Ciarán was telling me about his time in Australia, briefly moving to the AFL back in 2012, before Dublin had won their first of five-in-a-row All-Ireland titles. He learned a lot about different training methods in Australia, especially the pre-season running, but he had this deep-down feeling Dublin were about to embark on something special, and he wanted to be a part of it.

He’d actually been for a run in the Phoenix Park that morning, with a few other lads from the Dublin team, doing hill repeats. Just like that we struck up something in common and I wanted to know more. I certainly hadn’t imagined any Gaelic footballer out using some typical running sessions on a cold December morning. Or running along the same roads I like to run on, putting in the miles and effort up and down the hill behind the Magazine fort, alongside the Munich hill used by Eamonn Coghlan and many athletes since.

It’s only in recent years that I’ve come to appreciate these annual sports awards, making little connections like this, and how they’re actually significant far beyond the awards themselves. This was certainly lost on me back in 1990s when I was invited to quite a few of them, only invariably said no.

At the time, these awards just felt like too much of a distraction. They were always the wrong time of the year for me too, just after I was back into my winter training, after taking a full month’s break at the end of season. Once I was back I wanted nothing to break the routine, not even for half a day in December, six months away from the proper racing. I always had the fear of losing fitness, when I should be building, and I wouldn’t back down.

There was no social media back then, so no real FOMO either. And being away in Teddington, southwest London and later Australia, not really surrounded by Irish people, there was no one to point out the importance and significance of taking some time to acknowledge the support and share and appreciate the Irish sporting success of the year gone by.

I do remember the 1995 awards, being in Teddington and struggling with an Achilles injury. Gerard Hartmann, my physical therapist, had come over from Limerick to help me recover before I headed down to Australia for some warm weather training, and I certainly didn’t want to fly back to Ireland and break that routine. So RTÉ sent over a film crew with George Hamilton to get some “live” reaction, and look back on me winning the World Championship 5,000m in Gothenburg in August 1995.

I’d been for a test run in Bushy Park and things were looking up. Just as they were setting up for this remote interview to show later that evening it dawned on me that I probably should attend, so instead we all packed up and flew back together in time for the awards. It was all very last minute, and I can still see that RTÉ crew shaking their heads, thinking how could anyone so disorganised win a World title. Actually, it’s sometimes in those moments of indecisiveness we can make the most decisive decisions.

Still I didn’t appreciate how these awards bring together such a wide range of all athletes from various sports, and I’ve certainly come to appreciate them now whenever I am invited to attend. It’s easier to see things differently when you are not carrying the pressure of training and competing on your shoulders, but it’s important to know that there are times when it’s not all about the training and competing, but also connecting and learning from athletes across a wide range of sports.

I’m not sure what practice Shane Lowry put in before his name was etched on the 2019 Sportsperson of the Year trophy, but I discovered his wife Wendy is a keen runner. Ciara Mageean made a quick exit, with a long run planned for the following morning around the trails at Belfield, and it is all about balance, getting the training done the morning before or the morning after.

It was also interesting to hear the different plans that athletes have for next year, anyone thinking about the Tokyo Olympics already exactly mapped out where they will be for the next six months. It’s a reminder that they’re all in this together, striving to be best they can for themselves and their country on the highest stage possible.

There’ll be another reminder of this at the Sport Ireland Irish Times Sportswoman of the Year on Friday, at the Shelbourne Hotel in Dublin. These are the awards I always look forward to most, an elite group of 14 sportswomen gathered for lunch, across 11 different sports, with many of the coaches, friends and family who give support throughout the year.

It’s not an easy task to choose just one athlete each month: some of these sports hardly existed at such a high level two decades ago, and the fact there is no obvious outstanding Sportswoman of the Year makes it one more difficult decision for the judges as we approach year end and look ahead to an Olympic year, when the intensity and standard will no doubt reach an even higher level.

What I’ve also come to appreciate is the privilege and honour at being recognised as a role model for many of our current elite athletes, who are now inspiring young girls across the country. I never realised the importance at the time, so to be able to share the room with the best Irish athletes always gives a huge sense of pride and achievement.

For the women’s awards especially it feels like we’ve come a long way in a short time, raising the bar over and over again, inspiring dreams and encouraging young girls to believe anything is possible. Everyone in the room should appreciate and recognise that.