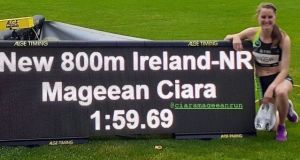 Ciara Mageean became the first Irish woman in history to break the two-minute barrier for the 800m with her victorious run in Bern, Switzerland.

It wasn’t where I had expected to be – and same with most others there too: watching the third annual Moyne Athletic Club Summer Games, at a four-lane track somewhere just outside of Thurles, chief among the audience being some cows in the surrounding fields.

This was meant to be the first Saturday of the Tokyo Olympics. Instead, it was the modest but long-awaited return to live athletics as we now know it; a full track meeting, with a programme and list of athletes from all around the country, before just a handful of spectators.

Over a period of five hours, from three in the afternoon to eight in the evening, athletes lined up and competed – for many the first real competition since maybe an indoor race back in February. The Trip to Tipp was worth the effort, and for the first time in a long while there’s some more live action to look forward to on the athletics stage.

There were no medals but some prize money on offer, and a €500 time bonus on offer for a sub-four minute mile for men, and sub-2:05 over 800m for women. And further inspiration to raise their game when, without much notice or expectation, the news filtered through from Bern, Switzerland the previous evening.

In was here, in her first race of the delayed outdoor season, Ciara Mageean became the first Irish woman in history to break the two-minute barrier for the 800m. Better still Mageean also took the win in 1:59.69, breaking the existing record of 2:00.58 set seven years ago by Rose-Ann Galligan at the London Anniversary Games.

It was Mageean’s first race since the lockdown back in February, and some well-timed consolation for the postponing of Tokyo.

A bit like the sub-four minute mile for men, breaking two minutes is a barrier women have been chasing since it was first achieved in 1971 by German athlete Hildegard Falck, also the 1972 Olympic Gold medal winner over 800m.

It’s also been out there as an achievable target for Irish women since 1974, when Mary Purcell ran 2:02.8, only like anything else, when you set a barrier in your head it can become just that: an insurmountable target.

In 2009, as a 17-year-old, Mageean ran 2:03, so always had high claims of being the first Irish woman under two minutes; still it took her 11 years of persistence and patience to fulfil that promise.

Since Purcell in 1974, there have been as many as 13 Irish women, including myself, who at one stage in their career would have believed that sub two minutes was a possibility.

Instead it has taken nearly 50 years of Irish female athletics for this landmark achievement to be eclipsed. It’s no real surprise when you look at the statistics over the past few years,and realise that, each year, only an average of 30 women in the whole world manage this feat.

In contrast, when you look at the men’s mile, there’s an average of 72 men each year that run sub-four minutes for the mile. In some ways running below four minutes for a mile has become fairly standard, so maybe there wasn’t enough respect given to the task last Saturday evening in Moyne.

Sean Tobin, Andrew Coscoran and Brian Fay, plus Hiko Tonoso, Cillian Kirwan and Shane Bracken all lined up with the help of their training partners Paul Robinson and Garry Campbell in an attempt to run the first ever sub-four minute mile in Tipperary.

There was certainly a lot of hype and expectation and the scene was set at the four lane track – interestingly built not too far from a wind farm and the first bend of the track backing on to a field full of those observant cows.

As the old soldiers’ marching song goes, it’s a long way to Tipperary and so I took the long route from Cobh to Moyne to find the track that just appeared in the most unlikely of places – smack bang in the middle of nowhere as my navigation announced your destination is on the right.

It’s hard enough when you line up for a race to block out any negative thoughts, but with the wind grabbing at your hair it’s near on impossible to ignore. That possibly played into the their psychology too, and try as they did, Tobin, pushed all the way by his Dublin Track Club team-mate and training partner Coscoran, came up just short running 4:00.38 in his home county just a whisker off running the first sub-four in Tipperary.

The women’s 800m was stacked too, with 10 runners, where Nadia Power was too strong for the competition but also just missed out on the time bonus, running 2:05.10.

It’s strange how often when we set a target in our head, we run the target and not below it. Tobin became the youngest ever Irishman to run under four minutes for the mile while at Old Mississippi State University, and he has run 3:57 at the Cork City Sports, but that targeted eluded him here.

In contrast, it appears Ciara turned up for her first race over 800m with little expectation from the fans or media, just knowing it was possible and doing what often delivers the best result – by focusing on winning the race, and the time will come. Fast times are great but there is no greater satisfaction than winning a race with the added bonus of a fast time – thus rising to the challenge and delivering on all counts.

It wasn’t an easy task to run fast at the tight oblong track in Moyne, on a windy evening in July, but the stage was perfectly set, and hopefully there will be another chance in this strange year of athletics for athletes to return and maybe set the bar a bit higher in their mind.