Sonia O’Sullivan: Olympics still on track but toilet paper Down Under fast running out

Public could learn from elite athletes how to adapt, change and then continue as normal 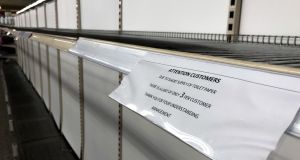 Empty toilet paper shelves in a shopping centre in Sydney, Australia, as the public indulge in panic buying due to fears over the spread of coronavirus. Photograph: Paul Braven/EPA

It first hit home when I stopped into the local supermarket to pick up some bananas and tofu on the way back from a coaching session on Tuesday night.

There was a proper rush on the bananas, and many of the shelves throughout the shop were either empty – or else emptying fast. Stranger still was the rush on a fresh delivery of toilet rolls. The entire aisle was completely cleared out and the workers couldn’t get the new packs on the shelves quick enough.

There was no denying the panic around the coronavirus had reached Melbourne – and just as severe, it seems, as anywhere else in the world.

I can’t quite figure out why some people would consider toilet rolls to be their number one priority, especially at this early stage. Perhaps I’m just operating in my own little bubble and missing something. Either way you do start to question yourself and wonder what is coming down the track.

Like everyone I’ve been following news of the coronavirus these past few weeks from a distance, aware of the dangers if the virus continues to spread worldwide, only up to this point it all seemed so far away. The impact on Australia has already been felt economically, with the issue of many Chinese and international students delaying their return to university, the tourist industry also taking a big hit, although in the bubble that is elite sport it’s still more or less business as usual.

There is still talk of the Tokyo Olympics being sufficiently far away, when in reality they are just around the corner. When it comes to any major sporting event every distance is not near.

Part of my surprise at the empty shelves was the fact that earlier in the day I’d been along to watch the Melbourne Track Club at the weekly Tuesday interval session. There was no mention whatsoever of the coronavirus, all thoughts instead on Tokyo. It was all systems go and on all fronts.

There was one minor hiccup when the regular grass track at Waverley was booked out for a school carnival, so instead the convoy of athletes in cars had to be redirected to another track 10 miles away.

It took about an hour for everyone to turn up at the Moorabbin tartan track and get started, already an hour behind schedule, but everyone was calm and collected and after a quick reset continued as normal.

There were 32 athletes in all, about an even split between women and men, many with Olympic aspirations for Tokyo, now just 141 days away. As well as the athletes from Australia, the Melbourne Track Club group right now includes runners from the UK, Canada, Japan and Ireland, all training for events from 800m right to the marathon.

The Irish crew are Seán Tobin, Paul Robinson, and Michelle Finn, the trip out here in part set up via the mirror group at home, the Dublin Track Club, and their coach Feidhlim Kelly.

Paul was a European 1,500m finalist in 2014 and is working back to his best, while Seán who has his sights set on exploring the marathon next month in Hamburg. Michelle is already well within the Olympic quota for her event, the 3,000m steeplechase, after recently winning at the Sydney Track Classic in a new personal best 9:38.04.

All have been based in Melbourne since early January, using up every day of their three-month visa allowance in Australia. Michelle has just extended her stay as things have been going so well and there is no rush back to Europe just yet.

After the 20 minute warm-up jog, some drills and then strides, they’re split into seven different groups based on ability and their event, and anyone standing around was given a watch and a group to monitor. I was left with the middle distance group including Michelle.

It all sounds nice and sweet, training Down Under in the warmer months, but it’s a big commitment to travel over 10,000m miles across the globe and set up camp in a foreign city. In Seán’s case it’s a long way from Tipperary, Michelle coming from Cork, and Paul from Kildare.

After the Falls Creek altitude training camp was cancelled due to bush fires throughout January, the Irish have stayed at seven different AirBnB’s, changed the rental car three times, and are working off a budget that would make you think they are representing a low-cost travel company rather than training to represent Ireland at the Olympics and European Championships later this summer. Presuming of course they go ahead as planned.

There is no guarantee that any of these personal costs and expense will pay off, but there are times in life when a risk needs to be taken to have any chance of paying dividends down the track. Sometimes that bit of variety and unpredictability can also help an athlete adapt to change and the unexpected, even if in the regular routine of their own bubble of things don’t always go to plan.

At this stage it appears as if the Olympics will go ahead, according to IOC president Thomas Bach anyway, and it should also be full steam ahead for the athletes, that they continue to train as normal.

There is no doubt some athletes will be affected by the uncertainty and cancellations and changes to planned events along the way, but you can only adapt as changes occur, react when met with a road block along the way. Some will take another route, some will go around it, but those that keep moving forward without fear or hesitation will in time reach their goal.

Last weekend’s Tokyo marathon, a world marathon major equivalent to London, saw the mass participation end of race cancelled, only the elite section of the race going ahead as planned. It was the trial event for the third spot on the men’s marathon Japanese Olympic team, and to be guaranteed that spot the time required was faster than 2:05:50.

With that Suguru Osaka went out and broke his own national record running 2:05:29 and collecting 100 million Yen for his efforts – almost €850,000 and securing his spot on the Japanese Olympic marathon team. On one level at least that race was business as usual, and there were plenty people out on the streets cheering the marathon runners to the finish.

Irish-born Sinead Diver and Britain’s Charlotte Purdue were also training at the track on Tuesday ahead of the upcoming World Half Marathon, due to take place in Gydinia, Poland and then on to the London marathon. Sinead and Charlotte are also travelling to Japan this week to help pace the Japanese women chasing the third and final spot on that Olympic team at the Nagoya women’s marathon, 2:21.46 the time required.

Again however the mass participation section of the race, over 20,000 women, has been cancelled with just over 100 elite women instead now expected to run down the road, business as usual.

If we all operate within our own bubbles, controlling the controllables, there should be no need for a rush on the supermarkets and the emptying shelves. Panic is never an option when it comes to sport and delivering results. Elite athletes often know best how to adapt, change and continue as normal and there’s a lesson in there for us all right now.