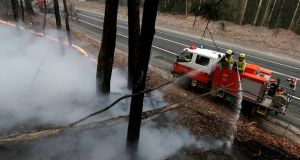 It started out just like any other New Year. A few days after Christmas and we headed off for the summer holiday training camp at Falls Creek, the small Australian mountain resort about a five hour drive north-east of Melbourne.

Typically in an Olympic year the numbers ramp up and the intensity is obvious.

It’s over 20 years now since I first came to Falls Creek at this time of year. Back then the village was a far quieter place, containing nothing even close to the numbers that now make the trek up the mountain to kick-start the year in the oxygen reduced air, across the undulating single-track trails.

I only arrived back from Ireland on Christmas Day, so hadn’t thought much beyond packing the car with stocks of food and a few good books, looking forward to getting away and enjoying the clear mountain air.

Then on New Year’s Eve a haze of smoke suddenly enveloped the village. It was so dense and thick that I went to bed early, closed all the doors and windows and wondered if the next day’s activities would be curtailed. At this stage it was smoke drifting in the wind from the New South Wales bushfires that had already been burning for weeks; another state, seemingly far away.

On New Year’s Day the smoke suddenly disappeared again. It’s funny how the lack of smoke in the air can leave you feeling perfectly secure and safe, especially when there were still no fires close by that were causing any immediate concern. I met some friends who rode up the mountain from Mount Beauty, happy to have some company on the bike for a short 50km, still with no sense we would be leaving the mountain anytime soon.

There was a smoky haze back over the village later in the day, the sun like a bright red fire burning in the sky, but still the air felt okay for a gentle run, enough to tick the box: my first run of 2020.

That night we had our first indication that fires may be a problem; we were put on an emergency watch and act alert. Still there were a lot of cars in the village and you felt some confidence in numbers.

The next day’s training session was kept to the village, still more concerned with air quality than the reality of any fire. At this stage we were all checking the Victorian State Emergency App for alerts and updates; the air was clear so we continued as normal, cycling, swimming, running even a circuit session on the tennis courts at 6pm.

By then there was an underlying sense of unease. We decided we would leave the next day, the Friday morning. There was a circular going around with a recommendation to leave the village by the latest at 10am the next day; but still with a feeling of calm ahead of the panic that lay ahead.

We sat in a cafe and weighed up our options; people were clearing out fast with all their bags. When you looked at the Emergency App, there was a clear road out of the village but the warnings and fires were looming in a horse shoe shape all around the village. Suddenly we were in the line of fire.

There was still time. The local CFA (Country Fire Authority) were confident Friday morning would be fine to leave. Earlier in the day I rode out of the village on my bike along the Bogong high plains road towards Raspberry Hill, which had a fire below it, only how far away? This was 18km from the village. I would normally ride on to 25km but as I descended the air was fast filling with smoke. I passed two fire fighters on the side of the road, plus a truck and a big excavator, just waiting in case they had to clear a line in the bush and try to stem the fire.

As I rode back, there was suddenly smoke all around. I just hoped and prayed I would make it back to clear air in the village. It’s as if you try to postpone the inevitable in your mind, and enjoy the borrowed time.

The air was all clear back in the village and I felt confident we could leave on Friday morning. By this stage we were getting messages and phone calls from Melbourne to leave the village as soon as possible.

The bustling village of athletes had started to resemble a ghost town. The car parks were empty, the smoke was returning, and there was an eerie feeling as the only activity was a few local CFA trying to jumpstart a car.

Walking back to the house thinking about dinner, and packing up the car and cleaning the house before departure, the sense of unease came flooding back again. One more check with the CFA: should we leave and drive through the night or wait until morning? Morning will be fine they said, just pack your car and get ready to go.

The air was clear as we closed the door and went to bed, and I thought about a short run in the morning before we hit the road. That was short-lived. The thick smoke was back early in the morning, and the only people out were the fire fighters arriving on the mountain to prepare for the day ahead.

There was no panic, but no hesitation either in leaving as soon as we could. Driving through smoke for most of the morning was a continual reminder of the sheer magnitude of the fires that were continually burning, still far away, but looming close in the background. We arrived back in Melbourne just after lunch, and by evening there was an evacuation order on the village.

This week, the fires behind Raspberry Hill are still burning and moving closer to the village, that horse shoe is narrowing, and even with a little relief from the weekend rain there are still some hot days ahead that can increase the fire intensity and direction as the winds swirl around.

In Melbourne, some days are more filled with smoke than others; we are still only on the periphery of the destruction and devastation across so many more towns and communities. It’s hard to even comprehend how these towns will recover.

You get a small trivial sense of what it’s like when the training camp is evacuated and plans need to change, but nothing to the extent of the communities of people who are displaced from their homes.

Still, it feels like the destruction and ferocity of the fires touches everyone. People come together and try to help others. Everywhere you turn in Melbourne there are opportunities to support the bushfire relief and the people who have lost everything and need to work out where to start again.

In the past week the running community has come together to be proactive. International elite athletes training in Melbourne, including Ireland’s Paul Robinson, Sean Tobin and Michelle Finn who never made it to Falls Creek, have set up #kms4bushfires where they will raise funds from all the kilometres they run this week and donate to the bushfire relief fund.

The forecast is hot for Friday, with another change in wind direction. There is plenty debate here on the global warming issue. It depends on who you talk to, but I know 20 years ago we were definitely not swimming in the lake at Falls Creek without a wetsuit; even when a wetsuit was rare.

Older people seem to think it’s always a thing in Australia but this is harsher, and unprecedented, the extent and scale of the fires and how they are joining together and burning for longer. It started out just like any other New Year.