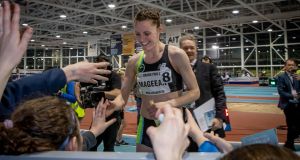 Like many things this year the World Athletics annual awards gala went virtual last weekend, held to highlight the best performances and announce the best athletes of 2020.

When I turned up to my training group last night, I thought I’d ask the question if anyone was aware who actually won the athlete of the year. We’re often told that athletics is for everyone from beginners to Olympic champions, but is that connection really there? And does it still have the reach from the greatest athletes to every corner of the globe, as they so often were in years gone by.

The track where I coach is in the Melbourne coastal suburb Mentone, where a larger than life artistic representation of Australian legendary athlete Ron Clarke overlooks the track. In March 1965, Clarke set the world 10-mile record on this very track, covering 40 laps, and most people in Australia would still remember him.

As it turned out, Swedish pole-vaulter Mondo Duplantis and Venezuelan triple-jumper Yulimar Rojas winning the men’s and women’s athletes of the year was indeed fresh news in Mentone.

Some were certainly aware of Duplantis, and Rojas is a new athlete for many outside the inner elite athletics circle to follow for 2021. Both winners coming from field events too, surprisingly.

Yet these local runners did come asking me about Patrick Tiernan, who on the same weekend had broken the Australian 10,000m record, running 27:22.55 in a race set up in California for athletes chasing Olympic qualification.

The qualifying window had just reopened after being shut down earlier in the year due to Covid-19, as there would not be the same opportunities for athletes all over the world to prepare, travel and compete due to varying restrictions across different countries. In all 14 athletes hit Olympic qualifying standards, over 5,000m and 10,000m.

For most casual observers, the general public who would have been glued to the television for the Olympics and more aware of current athletes, you’d be forgiven for wondering if the athletics season had just slipped by unnoticed, or if there even were enough events on to justify an awards ceremony.

From early in the year, I was staying alert to any events created to do something and not let a year go by without some effort to pull together a track or field event. As the weeks and months went by, organisers became a bit more creative and found a way to stage events for athletes to have something to aim for, and a reason to continue to prepare at a high level beyond the postponed Tokyo 2020 Olympics.

In such an unpredictable year it was certainly surprising to see 13 world records being broken, some yet to be ratified, having been run just last weekend at the Valencia half marathon.

Valencia has proven itself to be a hotbed for distance running this year with the women’s 5,000m record - the 14:06.62 run by Letsenbet Gidey from Ethiopia - and the men’s 10,000 - the 26:11.00 by Joshua Cheptegei from Uganda - both broken on the same night at the otherwise empty Estadio del Turio early in October.

These were my most memorable races of 2020, mainly because I was able to attend and commentate on the night. It’s always the things that you relate to most that you recall best, the live action that you get to be a part of.

When you think of full stadiums, crowd noise and atmosphere as part of world record attempts, it’s harder still to comprehend that such spectacular performances were dished out by 10 different athletes across 11 different events, from eight different countries. It will make for a good trivia question in years to come: name the athletes and events where world records were broken in the pandemic year when sport was turned on its head and made to find a way forward?

There were also a number of national records broken throughout the year, none more impressive than by an Irish athlete and Ciara Mageean creating history as the first ever Irish female to run the 800m in under two minutes. The dramatic dive to the line between Paul Robinson and Sean Tobin in the men’s 1,500m at the Irish National championships was another standout performance for Irish athletics this year.

Still it’s been a lost year for many, one that can never be reclaimed but for others a year of opportunity where they took a chance and achieved success. Of course to achieve success the stage needs to be set and the protocols in place to allow athletes to travel and compete in a safe environment in the time of Covid-19.

There is a real light at the end of the tunnel now, but there also needs to be some proactive movement made by the national federations to reach the end of the tunnel in a fit state, to help make sure athletes are ready to compete at the level required to be competitive on the Olympic stage.

That begins at home: there will need to be qualifying events set up to prepare athletes and it has been seen over and over again this year that it is possible to safely conduct events. They do need to be done quietly without the usual noise and fanfare, and simply let the results do the talking after the race, reap the rewards and see what is possible.

Irish athletics can’t just wait for the green light; it has to start nudging forward on the yellow so we are ready when things really get going in 2021. Just look at what many athletes achieved in a compromised year, but with safety measures in place it was possible. Athletics is one of the simpler sports to set up and create events.

It’s time now to focus on high performance to help out the athletes that will be representing Ireland, the athletes who will be on our screens next summer and for many years to come. Time to come out of hibernation and provide access and pathways for these athletes in Ireland - they need to be supported and encouraged to step outside the box look at what their international competitors have been doing, and make a plan that helps them to be ready to compete.

Duplantis and Rojas are both rising stars of world athletics, both young athletes and now athletes of the year, worthy of their awards after not wasting a year. There are many others nominated who just as easily could have taken the awards for their standout achievements, the likes of Cheptegei and Gidey, or Sifan Hassan, Karston Warholm, Johannes Vetter, Ryan Crouser, Jepchirchir and Elaine Thompson-Herah. You know their events?

These will be the names to watch at the Tokyo Olympics, and even in a pandemic year they were able to rise to the challenge and keep the bar high for 2021. This was not a lost year, just different and no less competitive on the world stage.