Hugely popular pastime was previously only available for men’s leagues 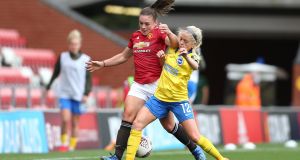 Question: What do you get when you put US World-Cup winning player Alex Morgan, Ireland captain Katie McCabe and all-time top scorer in the Women’s Super League, Viviene Miedema, on one team?

Answer: The starting formation of forwards on my fantasy football team.

My what? Up until recently, fantasy football was something I only knew about through my brother. Then I heard of She Plays – a fantasy football site for fans of women’s sport, in particular soccer and AFL.

She Plays was established by Ben Laws and Nicole Blinco in Australia in 2016, initially starting out with just the Australian W League. “We are just fans of women’s soccer and Australian football, we used to have friends who played fantasy football and realised no one in the world had started a league with women players, it just seemed crazy to us!” explains Laws from Australia.

For those who don’t play Fantasy Football, it’s – as Irish Times sports journalist Malachy Clerkin accurately explained it – pretending to manage a football team “that doesn’t exist, made up of players from teams that do exist, pitted against other teams that don’t exist, pretend-managed by other football fans.” It’s not just football fans that play though, says Laws. There is an increasing number of users who “are just fantasy football fans, which is cool”.

I sign up for the Barclay’s FA Women’s Super League in the UK. The season begins and I get a budget to spend forming my team. The rankings of players, and thus their “price’”, are based on how well they perform in each game and, like a manager, you can make changes to your starting side, change your captain and make transfers. There are the obvious picks like Morgan and Miedema, who take up a chunk of your budget.

I am surprised to see that Irish international Rianna Jarrett, who plays for Brighton Hove Albion, is valued at lower than I expected. As Laws says though, “people learn more about the younger players because they’re ‘bargains’ and you suddenly have them with a fanbase because of the points they get them.” After the game, each player earns fantasy points based on their performance. These points are added together to give a cumulative score.

It goes without saying that the league is not just for female football fans to play in and Laws has found that “it’s definitely quite a diverse group, which is nice to see. People who aren’t that into sport are getting involved.” For players, both women’s soccer and fantasy football fans, it is a game of logic, analysis and weighing up the variables to make the best team possible but there’s also the added bonus of improved information about women’s sports.

“It’s a great way, we find, for people to get engaged in the leagues, find out about the players. We ran a survey and found that 55 per cent of people watched more football cause of She Plays. It makes the work more worthwhile because of those stats.”

There are a number of fantasy football leagues that exist for male players, but Laws hopes She Plays differentiates itself, not only by the athletes but also the nature of it. “I mean we definitely have to try hard to give it a positive spin, if there’s any negativity, we cut it out as soon as we can. We aren’t trying to go the same route as the men’s leagues, we want it to be a nice, fun way to learn about the players and develop the game.”

Learning about the players, collating their information and reporting on the games is done by a group of volunteers all over the world. There’s Rory, the “web guru, who took She Plays from spreadsheets to a functional website”, volunteers in the UK and the US who do player research and of course, Ben and Nicola. “We’re all just working together to help grow the sport.” Anyone can financially support She Plays by buying the team a coffee on Ko-fi.com but Laws is adamant that the website will remain free, not becoming a subscription service or behind a paywall. “We want to make sure it’s accessible, we don’t want to charge people, just want to let them play”.

She Plays and women’s soccer have come a long way. “Back when we started,” Laws says, “the W league games weren’t even broadcast onTV at the time. And now, the Matildas [the Australian women’s football team] are superstars in Australia!” In just four years, the site has grown to include the Women’s World Cup back in 2019, the Barclays FA Women’s Super League, and the Australian Football League Womens (AFL). For Irish players, there should be a lot of interest, with a number of familiar names scattered across the UK and AFL leagues, with Megan Connolly, Leanne Kiernan and Denise O’Sullivan -– on loan from North Carolina Courage until the end of the year – some of the players in the UK league and Cora Staunton, Sarah Rowe and Sinéad McGoldrick just a handful of the Irish players in the Australian Football League.

Fans of men’s soccer often take the world of fantasy football for granted, but for women and girls, it’s an unprecedented way of exploring the game and the players and it’s a new way to enjoy football. While we wait for the real life fantasy in women’s football – equal pay, better representation and improved media coverage – we can at least now play the online version.