Sarah Dervan vowing to guide Galway back to the Promised Land 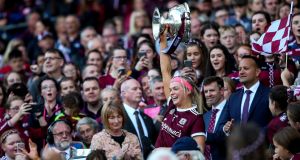 Sarah Dervan lifts the O’Duffy Cup in 2019 - Galway are back in the final once again. Photograph: Bryan Keane/Inpho

“This’ll be my third time planning a wedding,” said Sarah Dervan, making her sound a little like camogie’s Zsa Zsa Gabor. But it’s not that she’s a serial divorcee, she’s just had to postpone her wedding twice in 2020.

The Galway woman was supposed to get married back in March, but had to rearrange the date when the world turned upside down.

When did you reschedule it for?

So, there she was, carrying out her captain’s duties by taking part in a video call with the media to preview next Saturday’s All Ireland camogie final against Kilkenny, when she should have been, well, otherwise engaged.

November 2021 is now circled on the calendar, Dervan deciding to to give normality plenty of time to return. Her team-mate Niamh Kilkenny, who also had to call off her wedding this year, is more optimistically aiming for May.

“I’ve never appreciated something in my life as much as I have camogie this year, because it’s really carried me through all the lows,” says Dervan. “I’m thrilled I have an All Ireland to look forward to, rather than thinking about this. I just threw myself into camogie and I’m delighted to have had it it to keep me going.”

On Saturday, then, she will attempt to become the first captain to raise the O’Duffy Cup in consecutive years since Dublin’s Kathleen Ryder did so in 1966, Dervan having led her county to victory over Kilkenny last year.

She insists, though, that that honour is far from her thoughts, just getting to play in an All-Ireland final, after the year that was in it, the biggest thrill.

Being separated from her team-mates and having to train alone was, she says, the hardest part. “It was actually very lonely. Pucking around on your own just isn’t the same as going down to the pitch, meeting the girls, chatting with them, having a bit of craic.

“When everything was taken away, I struggled for the first few weeks. But we kept each other going, through Zoom and all that, if you had a hard day you’d be able to talk to someone. They are a special bunch of girls, we look after each other. We just prayed for the day that we’d get the go-ahead to get back training and playing. That first evening, we were all like kids going back to school, we were so delighted.

“It was brilliant, not just for us as players but for the families as well, because it gave them something to look forward to, even though they couldn’t go to the games. My parents are now experts on streaming, although it took them a few matches to get to grips with it. But it was just absolutely amazing to have it back. And it gave us something different to talk about apart from Covid.”

The only regret for Dervan, whose father Jackie was on the Galway team that won the 1980 All-Ireland hurling final, and whose brothers Cathal and Conor have both played for the county, is that family and friends won’t be able to attend the final.

“Your family are your heart and your soul, at the end of the day, they hit every ball with you. But I think they’re just so delighted that we’re getting this chance, they’re willing us on with every bone in their body. It is strange, it is hard, but we’re just so thankful and so privileged to be able to tog out in Croke Park for the final, we’ll just go out and give it our all for them.”

The 32-year-old, who works for Ballybrit-based medical technology company Medtronic, has been on the senior Galway panel for a decade and was a member of the 2013 team that won the county only its second ever All-Ireland. Their opponents that day, just like last year, were Kilkenny, but she dismisses any notion that Galway have the upper hand between the counties.

“They are always great games between the teams. In last year’s final they came within two points of us in the last few minutes. They never really go away until they’re on the bus on the way home,” she laughs. “It’s always nip and tuck with them, and they’ve beaten us in the Championship a good few times. But the past doesn’t matter, as soon as the ball goes in, it’s a new game, a new year.

“They’re a brilliant team, this is their fifth final in a row, that’s massive for a team to be able to be consistently competing in the All Ireland final. They were very impressive against Cork [in the semi-finals], they seemed to have their match-ups right, they have a new management team, they look very fresh. We’re going to have to bring our A game, and we have to go at it straight away because if we don’t start right we won’t be able to live with them after 10, 15 minutes.”

Playing in an empty Croke Park, at seven in the evening, doesn’t faze her either, she says. “We’re getting used to lights with training in the evening, even though we’ve never played under the Croke Park lights, but that shouldn’t be much of a difference. It’s probably more the mental side of things, having the long day before the game.

“Having no crowd is definitely going to be different, probably a bit strange, eerie, for the first few minutes, but once the ball’s thrown in, you just block out everything else, all you focus on is getting the ball and doing the right thing with it.

“It’s hard for families not to be able to go, but they’re so delighted we have this, they’re willing to do anything - if that means sitting at home watching it, they’ll sit at home and watch it. If you’d told me back in March that I’d be playing in an All-Ireland final a couple of weeks before Christmas, I’d have bitten your hand off.”