Sanita Puspure wraps up another rowing gold in Poznan 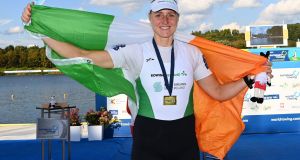 They stepped forth in near quick succession, placing the medals around their own neck, this repeatedly impressive self-presentation among the winning Irish rowers suitably wrapped up in gold by Sanita Puspure.

The 2020 European Championships in Poznan, Poland may be remembered on another few odd fronts - the one shot, one opportunity, one moment to medal in senior competition all year - but also the exceptional spirit on the water by the Irish rowers; seven crews, one final session, four medal winners, the other three ranked in the top-eight.

Conditions were near pristine and in the end the rowing was too from Puspure, who defended her women’s single sculls title with another dominant display, the mother of two thus becoming a double World and European champion at the age of 38.

Only the fifth fastest qualifier from her semi-final, Puspure called on all her experience to defend the title won in Lucerne last year, timing her effort to perfection, allowing some of her younger rivals get a slight start on her.

Sitting back in second after 500 metres, she took command at the 1,000m mark, only a split second ahead on the Austrian Magdalena Lobnig, before pulling away from there to win by over a boat length, clocking 7:36.04, with Lobnig second 2.42 seconds back, the young Greek Anneta Kyridou taking the bronze.

“I had a solid race plan and wanted to execute it well and leave everything on the course,” said. Puspure. “Conditions were good too that was helpful, so I just kept pushing on, as I felt quite good.

“The last 30 strokes I just had to hang in there, and it was nice to finish-start season with a win. Delighted with it.”

Indeed it was her only race this season, yet a sixth international medal for Puspure, having also won European bronze twice before, and although two months shy of her 39th birthday, Puspure has laid down another big marker before Tokyo 2021.

It topped off a highly productive day on the water for the Irish crews, as Fintan McCarthy, Daire Lynch and Ronan Byrne, and then the Irish women’s four presented themselves with bronze medals.

After winning a World championship gold medal in the lightweight double scull last year with Paul O’Donovan (who wasn’t competing here due to medical exams), McCarthy was rowing solo and went for the proverbial broke - setting a ferocious stroke rate from the gun and still leading through the 1,500-metre mark by just over a second.

The 23-year old was passed in the last 500m stretch, Norway’s experienced rower Kristoffer Brun coming from some distance back to take gold in 6:58.75, with the young Italian Niels Torre (21) taking silver in 6:59.11. McCarthy crossed the line in 7:02.15, duly rewarded with the bronze medal after his brave and properly determined effort, another international medal for the 23 year old and his club Skibbereen, and also his coach Dominic Casey.

Not long after that, and having already won gold in the men’s double at the Under-23 European championships last month, Ronan Byrne and Daire Lynch also won bronze after a more even-judged effort, sitting in fourth at the 500m mark, then moving steadily into third, finishing just under three seconds down on the Dutch crew, who took gold in 6:18:69.

Then a similarly young women’s four of Aifric Keogh, Eimear Lambe, Aileen Crowley and Fiona Murtagh defied their lack of experience to win a third bronze for the Irish team. Gold there as expected the Dutch crew, in 6:35.49, with the young Irish quartet ending up in a close sprint finish with the Italians for second, only to lose out by .37 of a second.

“These results have continued our success this year at Under-23 and Junior Championships, and we now have nine medals from three competitions at three different levels,” said Antonio Maurogiovanni, Rowing Ireland’s high-performance director.

“We’re not considered the underdog anymore, and we all need to do better and push the bar higher to keep our current level of international competitiveness. A big thank you to all of the national coaches Dominic Casey, Giuseppe De Vita, Fran Kean, John Armstrong, Ciro Prisco.”

Earlier, the Irish women’s pair of Tara Hanlon and Emily Hegarty, both aged only 22, placed fifth in their A Final, and Lydia Heaphy won in her lightweight singles B Final. Aoife Casey and Margaret Cremen also finished second in the lightweight double scull B Final, which means all seven Irish crews were ranked in the top-eight overall.