Despite having to train alone due to Covid, rower defended her European title with ease 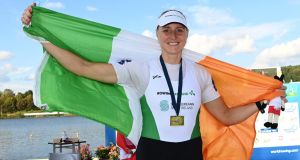 It was last December, when she was crowned our Sportswoman of the Year for 2019, that Sanita Puspure spoke about how much she was looking forward to 2020, not least that little event that was due to take place in Tokyo during the summer. But then . . . you know yourself.

The last eight months have, then, been a touch surreal for the double world champion, deprived for a chunk of that spell, like all her sporting colleagues, of the rhythm of a regimented training routine and a calendar that told her precisely when she needed to peak.

In the early stages of the first lockdown, she wasn’t allowed train on the water at all, and for a while after she could only train alone. That, she admitted, resulted in the motivation seeping out of her, the lack of competition removing the edge from her work.

“Training alone, I found that really, really challenging,” she said to RTÉ’s Game On. “As an athlete it was very hard because we’re so used to that competitive environment in training – that’s what keeps us going and pushes us everyday. The intention to train well was there but I don’t think I did because subconsciously there was no motivation to push myself to the very limit of what I could have done.”

So, when she headed to Poznan last month to defend her European title, rather than it being her first outing after the Tokyo Olympics, it proved to be her first competitive event of the whole year.

She would, then, have been forgiven for being a little rusty, but instead she cruised to victory in the single sculls, picking up her sixth major international medal.

By the halfway stage of the race she was in control, leaving the field behind her to win the final by over a boat length ahead of Austrian Magdalena Lobnig and Anneta Kyridou of Greece. Puspure, who will be 39 next month, had, despite those lockdown struggles, produced the goods yet again.

And no sooner had the Ballincollig-based rower that gold medal placed around her neck, she was talking about her Tokyo ambitions again, conceding that, despite retaining her European title, she’ll have to up her game if she is to be in contention for an Olympic medal.

Mind you, after the year she’s experienced, her 2021 calendar will be littered with question marks. All she can do is push herself to the limit and hope that she gets the opportunity to add the ultimate medal to her collection.