‘Having that outlet took a massive weight off all our shoulders, it was a distraction’ 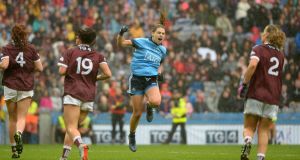 Once she began studying medicine in UCD back in 2009, and then moved in to her internship phase six years later, there were, admits Noelle Healy, plenty of times when the last thing she wanted to do after a lengthy shift was to haul herself out of her bed to go training.

The four-time All Ireland winner, who made her senior Dublin debut as a 16-year-old back in 2007, coming on as a sub in their first ever triumph in the competition in 2010, is now preparing for her eighth final in 11 years.

But this, of course, was a year like no other.

After a spell working at Cork University Hospital, Healy returned to Dublin at the start of the year and was on duty, as an anaesthetist in intensive care, in Temple Street children’s hospital through the first wave of Covid and in St James’s for the second. And during the worst of the period, she was among those redeployed to other hospitals when they had staff shortages.

“When you’re dealing with something that stressful, you can usually leave it in work and park it. But when you were leaving work in March, you were turning on the radio in the car and there it was, you were going home and it was on the television, that yellow Covid-19 sign was just everywhere. So yeah, it was football that provided an escape. Having that outlet took a massive weight off all our shoulders, it was a distraction.

“As players, we really appreciated each other this year, more than any other year. We’ve often talked about the support structure we offer each other, but this year it really hit home for us how important it is. We acknowledged how special a group we all had and how, first and foremost, we missed each other.

“We did our Zoom cooking competitions, quizzes, all that, but it’s just not the same. We play a team sport for a reason, we thrive off that camaraderie, the togetherness. We’ve been through a lot of ups and downs together, we know each other so well, so I think to have been so separated from each other for that length of time was tough.”

Before she resumed training with Dublin, Healy made sure that her team-mates were okay with her presence, aware, as she was, that they might have concerns because she was a frontline worker.

“There was a certain risk that came with my work, of course, and that was definitely something I was conscious of before I came back to the group, particularly because of the exposure working in intensive care units.

“It certainly wasn’t a decision I took lightly, I spoke to Mick [Bohan, the Dublin manager] to make sure nobody in the group would be unhappy having a healthcare worker there, especially when so many have vulnerable people at home. We were all very open about that. But they welcomed me back, we trusted each other to take the right precautions, we looked after each other.”

So, a testing time will conclude with the 2017 Footballer of the Year attempting to assist Dublin in their four-in-a-row efforts.

Having played for a year with Mourneabbey, while she was working in Cork, winning the All-Ireland club title with them in 2019, she’s more than familiar with the strength of the opposition, not least her former team-mates Doireann and Ciara O’Sullivan, the current and previous Cork captains.

Before then, though, she faces another challenge – sitting down with her Mayo-born parents, Sheila and Richard, to watch the men’s final. “Me and my sister wear Dublin jerseys, my mum [from Charlestown], my dad [\from Aghamore] and my brother wear Mayo ones. It’s a divided family, for sure.”

But once Saturday is done and dusted, her parents will swap the green and red for blue. “My mam was ringing me before every match this year, to wish me luck and to see how I was getting on. I could definitely sense when I was talking to her before the semi-final that there was a genuine sadness there that she wasn’t able to go to the match.

“I think they are finding it very tough watching it all at home, not being there. They’re the first people you go to after a game to give a big hug, And my dad is the first person I ring when I get in the car after the matches, just to chat through it. Ah yeah, it’s been a year like no other.”