New avenues and adventures opening up for female sailors 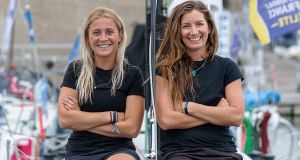 Catherine Hunt and Pamela Lee will race in the Iarracht Maigeanta (Éire), an all-female offshore double-handed sailing challenge around the island of Ireland.

There were a number of factors that made Pamela Lee decide to organise Iarracht Maigeanta (Éire), an all-female offshore double-handed sailing challenge around the island of Ireland: Covid-19 cancelling competitions, a desire to train for the inaugural event in the 2024 Olympics but mainly, “to show women and girls this new avenue of sailing”.

It’s a male-dominated sport, Lee tells me over the phone, often it’s “hard for women to get opportunities to do bigger roles like navigating and skippering rather than just crewing”. However, the introduction of a mixed double-handed offshore class of sailing into the 2024 Olympics has changed that somewhat. “The two-person team has to be a man and a woman, that’s a lot of responsibility! Each person has to be completely confident in everything, every aspect of it. It immediately opened up a new avenue for women and girls to really start getting into those roles.”

Prior to planning this challenge, Lee was working towards Olympic qualification for this very event with team-mate Kenneth Rumball (the Irish qualifiers, as well as the World Championships they hoped to qualify for, have been postponed due to Covid-19).

This was when she met her co-skipper, Catherine Hunt, a final year biomedical student in the University of Southampton. The timing has been tricky for Hunt, balancing her final year of university as well as preparing but “when Covid hit the full season of sailing I had planned was cancelled. I moved back in with my parents, uni work stopped, there was no sailing. It is hard to have all of my goals taken away but I’m lucky because no one I know is affected by it [Covid-19].”

They met in France at La Solitaire Du Figaro – the best-known race of this type in the world – and the rest is history. “We spoke the same language, were the only non-French women there and realised we had the same ambition and knew where we wanted to go. We knew that to be taken seriously as offshore sailors and not just the token female, you have to put yourself out there and prove something. Although, Covid dampened our opportunities, we needed to prove that we are serious.”

Undertaking the voyage double-handed (with only two sailors) is a significant challenge, given that most offshore sailing of this distance is done with a minimum of eight. Yet, Lee wanted this to be an all-female crew to highlight that women are not part of the event purely because of the new requirement.

“Shorthanded racing is a great discipline because it demands that each skipper is skilled in all aspects of offshore sailing – from navigation to boat preparation and sail trimming. It is fantastic for women to be involved in in particular, because it offers opportunities to learn and take the lead onboard that are often harder to get on a fully crewed boat, where roles are more compartmentalised.”

The challenge begins on a line off Kish Lighthouse and circumvents 698 nautical miles the whole island. Once they reach the Atlantic Ocean they’ll be exposed to its harsh weather conditions, all along the west coast. Once around the northern tip of the island, they will have to contest with the strong tides around Rathlin Island, where the speed of the water can often exceed the speed of the boat in the opposite direction.

The final stretch involves navigating the fickle winds and tidal currents of the Irish Sea to the finish. To the untrained, this may sound like a nightmare but for offshore sailors, the unexpected elements outside of your comfort zone are what makes it all worthwhile.

“Put me in the middle of a storm any day!” says Hunt. “When I get home, I’ll absolutely be ready for home comforts but I would much prefer that [sailing in extreme conditions] than being tucked up in bed, but you have to have a specific personality to want that. Putting yourself out of all those comforts, pushing yourself, that’s the side of offshore sailing I really just love.”

The nature of the challenge will mean they will be sailing consistently for the five days and nights, having to run a two-hour rotation of being ‘on watch’. The longest break either will have over the duration of the journey for rest, sleep or food will be two hours. This, I pose to them, sounds horrific?

“It’s funny,” says Hunt. “That sadistic part of it draws me back, Type 2 fun, when you look back you’re like ‘Wow! I did that.’ It’s pretty addictive.”

Lee agrees: “There’s not much else like being out at sea on your own, embedded in the challenge out at sea. Not many times in life where you’re just in it 100 per cent, I definitely have a bit of adrenaline addiction off that. It’s really cool, love being offshore, always have, don’t know why. But it is a really unique thing to experience, especially now with phones and whatnot, that need your full attention. Think that’s what makes the rest of it worthwhile.”

Lee and Hunt are leaving in mid-October and are currently in their final stages of preparation and finding the perfect time to go, weather wise. When they’re out at sea, they’ll have just each other to rely on, but onshore the team is bigger.

There’s Rumball, Lee’s team-mate (“I was his shoreside support for France and now it’s flipped, he’s ours!”), Lee’s parents, and Miles Seddon, the group’s onshore navigator and weather router, as well as The Magenta Project – a collective of sailors aiming to develop paths and opportunities for women in performance sailing – who Hunt and Lee are collaborating with.

The Magenta Project’s support is huge, says Hunt, and it embodies what they’re trying to do with the challenge: “Inspire more girls to get involved and to take on more responsibility within sailing.” Essentially, if they can show one young girl that she could do it too they’d be happy. Hunt adds: “The impact it made for me having a few female offshore sailors was huge, even though it was only a few at the time. I cannot stress how valuable that was for me as a young sailor.”