Nadia Power determined to push on to the next level 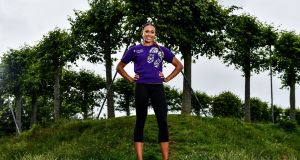 Nadia Power: “It would have been a bonus, to make the Olympics this year, but next year now it’s a bigger target, I’ll be 23, and no excuses.” Photograph: Sam Barnes/Sportsfile

Nadia Power was reading a column by Sonia O’Sullivan, a few weeks back, which softly lamented the lack of something as magical as the sub-four minute mile for women. At least for the foreseeable future.

When, in March, the Tokyo Olympics were postponed to the summer of 2021 due to Covid-19, she again took the positive stand: after winning bronze over 800m at the 2019 European Under-23 Championships, those extra 12 months might prove a godsend.

“Definitely, it’s a blessing for someone like me,” she says. “It would have been a bonus, to make the Olympics this year, but next year now it’s a bigger target, I’ll be 23, and no excuses.”

And when, last week, Athletics Ireland confirmed a National Championships for the weekend of August 22nd/23rd, also postponed from last month, Power saw the chance for another senior title to sit with the indoor 800m she won on March 1st.

These are the things that most occupy the mind of the 22-year-old from Templeogue in south Dublin. But with a father from Sudan, and a mother from Kilkenny, Power inevitably found herself occupied by the conversations about racism in recent weeks, beginning with the Black Lives Matter movement, and continuing with the International Olympic Committee (IOC) recently updating Rule 50, which effectively outlaws any sort of protest in or around the Games.

Power felt comfortable and compelled to take a stand on this too, initially supporting fellow Irish athlete Gina Apke-Moses in a series of social media posts, then taking part in photographer Ramsey Cardy’s campaign highlighting the diversity of Irish sport, under her own slogan “diversity creates dimension”.

It’s a conversation she’s willing to continue, realising too it will have some element of timing about it: “I’ve certainly had some conversation with my friends, and would have received a good bit of support on social media. It is calming down a little bit, and it’s not something we can just keep talking about, every day. It’s more about keeping the opinions changed in the head, keeping working on that, and being ready if anything more about racism does come out, that now our new, more educated selves know had to act in that scenario.

“I’ve never talked in public before about anything except me being an athlete, and my own personal races, so it was an interesting time for me, to be able to share that voice. And I’ve got a lot of support back, and it has made me think that it is worth talking, and supporting something I am passionate about.”

It is also, Power admits, “a tricky subject” when it comes to where exactly the line is drawn on taking a stand inside the Olympic arena: the IOC Rule 50 is designed in part to protect athletes from potentially divisive protests, and help keep some sort of safe moral ground, and for now the IOC are adamant it must stand for Tokyo.

“I’ve certainly respected any athletes I’ve seen do that [take a stand], and would have been a little disappointed if they got any sort of bad reaction, and I think it was kind of mad for the IOC to put out that statement last week, I think was really tone deaf. There was no need for that to be declared at that particular time, when we have seen athletes taking stands.

“I’ll always support a protest like that, if it’s to do with people being treated equally, but at the same time I can see why the IOC do have to have some kind of stance on that, because you can’t have every single athlete protesting every single thing. Everyone has different beliefs, and if you had every athlete protesting on the podium at the Olympics, about their own personal kind of beliefs, it wouldn’t really work out well.

“So it is a really, really tricky subject. I just don’t agree with the timing of that announcement last week. But I think it can be a motivation too, for athletes, if they really wanted to make the podium, to prove their cause, that’s an added level of motivation.

“But it’s a fine line, and in some ways I do understand where the IOC are coming from. And I know I’m on the lower end here, if someone is on the podium, or is a huge high-profile star, they do have a harder time, because their voice is so, so important internationally.”

She’s also taken the advice of her mother to avoid reading any comments under articles about her running for Ireland.

“I’ve seen it over the last few years in comments about other Irish athletes who had won medals, some of the nasty comments, and it’s really common in other sports too. My mam being from Kilkenny, and my dad from Sudan, when they got together in the 1990s I’m sure they faced a lot of negativity, and she’d be more hyper aware, looking out for me.”

Nadia Power was speaking at the launch of the Irish Life Health Mile Challenge, a week-long challenge to find out the fittest club and county, starting on August 17th. See www.athleticsIreland.ie