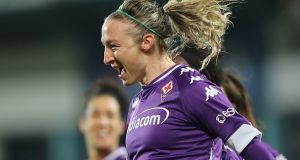 Fiorentina, who will now play league leaders Juventus in this Sunday’s final, trailed 1-0 at the break but after Abigail Kim levelled things 11 minutes into the second half, Quinn stepped up to head home a corner with 25 minutes left to play.

Both sides had chances to score after that but Fiorentina goalkeeper Katja Schroffegger made a couple of good saves which, with some good defending, kept Milan at bay and helped to seal the win.

Quinn, from Blessington, joined the Fiorentina in the summer after leaving Arsenal where she had enjoyed a successful spell. This was the 30 year-old’s second goal for her new club and the win was a big one for a side that trailed their opponents in the league by 13 points with 10 games played.