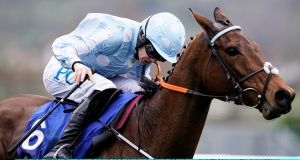 By the time Rachael Blackmore brilliantly rode Honeysuckle to victory at Cheltenham on Tuesday, the Tipperary woman had already taken our award for February. Photograph: Alan Crowhurst/Getty Images

It’s probably just as well that our sportswomen can only win one monthly award in the year because at the rate Rachael Blackmore’s 2020 is going, she’d end up with a whole stack of them. Which, come December, would leave the roll of honour looking a bit confined.

By the time she brilliantly rode Honeysuckle to victory at Cheltenham on Tuesday, the Tipperary woman had already taken our award for February, the highlight of which was that day in Leopardstown when she did a Grade One double.

It was in March of last year that she had the first Grade One winner of her career, one of two successes she had at Cheltenham, and it would appear that she’s developed a taste for it.

Her first victory on day one of the Leopardstown festival was on board Notebook in the ERSG Arkle, and then she completed her day with the big one, when rode another Henry de Bromhead winner, this time on Honeysuckle in the Irish Champion Hurdle.

Herself and Honeysuckle are quite a partnership. “I got some kick out of that,” she said after Tuesday’s triumph on the same horse, but as is Blackmore’s wont she reluctant to take any of the credit, “sometimes the ball bounces in your favour,” as she put it.

As she talked about it on Tuesday, she went to this year’s Cheltenham with considerably more pressure on her than before, her form through last year, when she was runner-up in the jockeys’ championship to Paul Townend, form she has maintained in the new season, increasing the weight of expectation.

She’s taking it in her stride, though, and with several more rides in the final two days in Cheltenham, it would be no great surprise to see her back in the winner’s enclosure.

In her record 16th appearance at the European Cross Country Championships, and a record 38th senior appearance for Ireland, the Wicklow woman just missed out on a medal in the individual race, finishing two seconds behind the bronze winner, but led the team to silver, Aoibhe Richardson and Ciara Mageean’s top 20 finishes sealing the success.

While most of their success to date had come on the road, the pair having won five gold medals at Para-cycling Road World Championships, they transferred that pedigree in to their performances at the Track World Championships in Canada in January, winning silver in the Tandem Pursuit and breaking their own national record en route to that medal.