Katy Herron on life as a pro: ‘Over here, it’s Joshua and football, nothing else’ 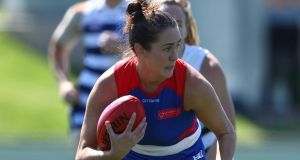 Katy Herron in action for the Western Bulldogs during an AFLW practice match against Geelong Cats at Whitten Oval in Melbourne recently. Photograph: Robert Cianflone/Getty Images

Joshua Herron will have some stories to tell his pals when he gets home to Donegal from his five-month adventure in Melbourne, not least about his mother playing professionally in the Australian Football League.

Mind you, since he was born, seven-and-a-half years ago, he has become accustomed to seeing her achieve big things in football, if in a different code.

He was two when she was named Donegal Gaelic Footballer of the Year; three when she captained her county to their first ever Ulster title; and six when she was nominated for an All Star after a glittering season that saw Donegal reach a senior All-Ireland semi-final for the first time, and when she scored the winning goal to give her club Glenfin their second successive county title. And on Sunday he’ll watch her make her AFL debut for Western Bulldogs when they take on St Kilda in Melbourne.

And while the arrival of Joshua in 2012 left Katy Herron wondering if she’d be able to continue playing sport at all, his presence in her life has had the opposite effect. “He has,” she says, “helped me become the best player I could be”.

“I was 22, in my last year in college,” she says. “I’d made my debut for Donegal the year before, and then everything fell to pieces – I was pregnant. At first you think that’ll be the end of it, but I didn’t want to drop out of college, and I didn’t want to be defined as a person who was once a good young footballer but gave it all up.

“It was tough at the start, you feel like you’re having to fight for those dreams all over again, and there were times when you would be ready to give it all up, but I was determined to keep going. I wanted to qualify as a teacher, to have a good job for Joshua’s sake, so we could have our own home, and because of my love for the sport and for Donegal, I really wanted to get my jersey back.”

She succeeded in both, graduating from college just weeks after having Joshua, getting back playing for Glenfin within two months and reclaiming her Donegal jersey in time for the new season. She is now a Maths and PE teacher at Holy Cross College in Strabane, although she’s currently on a six-month career break to facilitate her spell in Australia.

She gives the bulk of the credit for that success to the support she received from her family, particularly her parents, natives of Welchtown just outside Ballybofey. And she has drawn on her own experiences for her work as a mentor with the Youth Sport Trust, in collaboration with Lidl and the Ladies Gaelic Football Association, for whom she visits schools to talk to young girls.

“You don’t want to encourage them to get pregnant young,” she laughs, “but I just use my story to show the girls that they can overcome any challenge they come across. It’s a brilliant initiative, it was lovely going out into the schools and seeing how the girls took all of it on board. I’m looking forward to doing more of that work when I get home.”

First, though, there’s the small matter of her Aussie Rules baptism.

It was during her first practice match for the Bulldogs two weekends ago that she wondered about the wisdom of accepting the club’s offer of a contract for the 2020 season.

“I went out thinking I was really well prepared . . . until the first couple of hits. I was like, ‘oh my God, I’m going to get killed out here’. That was the biggest eye opener, really, the physicality of it. And I got caught badly in our second practice game for holding the ball too long. In Gaelic you wouldn’t kick it if there wasn’t a pass on. Here you either kick it and save yourself – or get nailed.

“I had a bit of whiplash after one of the hits, I didn’t even realise until I woke up the next day and I literally couldn’t move. So it’s just about being more aware of that physicality. I feel much more ready now, more educated – and cute, maybe.”

She was eager to accept the Bulldogs’ offer when they initially approached her, but she doubted that, as a single mother, it was practicable. “I just didn’t think it could happen because of my situation,” she says. Her family, as well as the club, though, convinced her that she could make it work.

“I’d never really got a chance to travel when I was younger, I literally had never been anywhere until I went to Dubai two years ago – when I was 28! I’m 30 now, so I knew I’d never get a chance like this again, I had to grab it with both hands.

“And I’m loving it. It’s just a totally different lifestyle with the weather, I don’t have to worry about work, I’m able to focus on the football, and I’m getting to spend more time with Joshua than I ever did. I’m home-schooling him because when we got here at the end of October it was their summer holidays, so there was no point enrolling him for just a month and a half. He’s settled in really well, and he’s even happier because my Mum and Dad arrived over last Thursday.”

“At home I’m getting back at five, doing homework with Joshua, then it’s his bedtime and then you’re going to training – that cycle is just repeated every week. You’re tired, you’re fighting your way through the evening. Over here, it’s Joshua and football, nothing else.

“And the facilities at the club are second to none. Everything you need, like the gym, is on site. We have about 30 people in our backroom team, nearly more than the squad, so there’s always somebody available if you need help with anything. The best part is that with all that time and support, you can push yourself to the limit and see how much better you can be.”

Herron is one of 17 Irish players who will be in AFL action this season, among that number her Bulldogs club-mate Aisling McCarthy of Tipperary, and her trusty Donegal and Glenfin comrade Yvonne Bonner who, like Cora Staunton, is with Greater Western Sydney Giants.

“I’ve only played against Yvonne once, in a school match, apart from that we’ve always been on the same team – so when we play Sydney next month . . . it’ll be interesting,” she laughs. “She texted me and said ‘you better not be playing full back that day’.” Would you nail her? The pause suggested . . . ‘if needs be’.

She hopes her spell with the Bulldogs will extend all the way to April’s Grand Final, but come what may, she’ll be home to resume her Donegal duties.

“If I wasn’t going to get back for the championship, I probably wouldn’t have come out here in the first place,” she says. “I’ve been about for so long, I probably don’t have too many years left with Donegal, so I wouldn’t be able to up and walk away. Playing for Donegal means everything to me.”

She wants her jersey back, then. And to give Joshua more stories to tell.