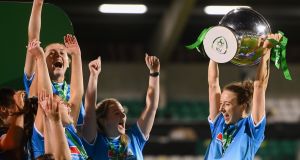 Peamount United midfielder Karen Duggan has been named Women’s National League Player of the Year after a season in which the 29-year-old from Kilkenny played a key role in her club’s league and cup double success.

“Winning the League last season was a monkey off our back for Peamount United, we felt like we were getting the club back to where it belonged,” said the former Ireland international.

“But with everything that happened this year, the group of girls that we have and finally getting our hands on the Cup trophy after many disappointments there, it was just a magnificent season. It definitely is my best season in football.”

In a poll mainly consisting of league managers and Duggan’s fellow players, the midfielder, who got one of Peamount’s goals in the cup final a couple of weeks ago, came out on top for the second time and finished ahead of team-mates Aine O’Gorman, who finished the league campaign as top scorer, and Eleanor Ryan-Doyle as well as Cork City’s Saoirse Noonan and Pearl Slattery of Shelbourne.