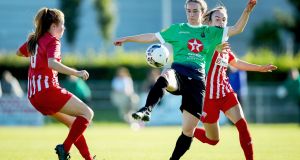 Karen Duggan is on something an FAI Cup run, just not the sort, she admits ruefully, that she is keen to maintain when Peamount United take on Cork City in this year’s final on Saturday in Tallaght.

Having beaten their opponents 3-0 at home and away in the league on the way to successfully defending their title, the Dubliners will start as strong favourites to win again this weekend but the 29-year-old midfielder certainly sounds like she means it when she says she is taking nothing for granted.

“I’ve also been on the receiving end of a cup final loss to them with UCD Waves and I’m well used to losing cup finals,” says the former Ireland international who, fairly incredibly, has walked away empty handed from five and is still without a single winner’s medal at this stage.

“And if you look at it on paper, the team that have kind of made the most impressive improvements in their results from last season is Cork. They have a real identity to how they play, they’re very confident on the ball, you can see that they’re working on something down there.

“They’ve a lot of dangerous players who can hurt us and it’s a cup match and obviously they’ll be coming up all guns blazing so we’ll be giving them the respect that they definitely deserve.”

It been another bad week with regard to respect in the wider world of Irish women’s sport acknowledges Duggan, with events at Croke Park last weekend serving to severely undermine some of the progress made by campaigns like 20x20.

Still, she is more focused on this weekend’s camogie final with five of her Piltown team-mates involved in the Kilkenny panel that will take on Galway. The plan, she says, is to get back to the Peamount United clubhouse and watch the later game on the big screen.

“I kind of hid it for a while,” she says, laughing, “but I’ve played every year [with Piltown, where she is from] and I’m kind of proud of that. I would have played under-16 and minor and I was kind of part of that golden era for Kilkenny where they were like winning every year.

“A lot of the other players are still playing seniors. They’re still going 11 or 12 years later, they’ve had amazing careers. They’ve only got one All-Ireland (having made seven finals since 2009) but they are still plugging away and I really hope for their sake so they can get another one this year.”

Duggan was involved with a wide range of sports as a kid and believes, at a time when there has been talk of the need for early specialisation, that it all fed into her ability as a footballer.

“I played everything; basketball, swimming, Gaelic football and hurling with the boys, there was something every day of the week. And I do think that that stood to me.

“I think I learned a lot, from the likes of basketball, where when you lose the ball, you have to get it back because otherwise they’re gonna score straight away, so you get that sort of mindset.

“Coming from camogie, which is a lot more physical than football, you’re used to getting into those rucks, those battles, trying to win dirty ball. You learn a lot playing at a young age and playing with boys was certainly a big influence on me. I had to be told to stop playing with them in the end.”

She is despite it all “a camogie head” but realised early enough that she was actually better at soccer. Having been capped at underage levels, making the Irish senior team became the target she set her mind to. But she was always academically focused too and never seems to have felt that turning pro was the way she really wanted to go.

“There are a lot more opportunities and when you see a lot more girls going now it becomes a more realistic target maybe. But it depends what you want and I was pretty academic and I wanted to achieve in that as well.” She has gone on to work in consulting, first with Accenture and now with EduCampus.

“I was too shy, too quiet when I was younger anyway, I wouldn’t have even come to Peamount [after studying at University of Limerick] if it wasn’t for Julie-Ann [Russell, her friend and fellow international] going.”

Her shyness, she says, was a big factor back then which seems strange given how comfortable she comes across these days when working as an analyst on international games with RTÉ.

Having won 35 caps, she stepped away from the Ireland set-up in September 2018, slightly frustrated by the ever increasing demands being placed on players by the association. Conditions around actual international match days are, she suggests, “spot on” these days but the sort of supports she believes should be offered the rest of the time, given the amateur nature of the league here, fall well short of what it needs to be, with young players encouraged to turn pro in part because it transfers the burden for their continued development to clubs overseas.

This time last year, she suggested that the cup final against Wexford Youths might mark the end of her road in the game completely but she laughs at the notion now and says 2020 has changed her outlook.

“I don’t know what I was talking about last year,” she says with a laugh. “I’ll be sticking around. The year that we have had this year – working from home, not being able to travel, all of that – the fact that I had football gave me some semblance of normality, getting to go out and interact with people outside my house and Peamount United made sure that all the protocols were followed.

“Winning the league gave us the opportunity to go to Europe next year and that is definitely something I’d like to experience again. Obviously, we’ll see how the body is next year, I’ll be turning the big three oh but for now, no, football’s been the thing that has kind of kept me sane, it’s given so much to me this year that I couldn’t imagine stepping away, yet.”