Joanne O’Riordan: When it comes to nurturing women in sport, Aussies rule

So many Irish women footballers are joining the AFLW, it must be doing something right 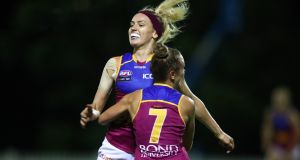 While the AFL men’s Gaelic football trade experiment is more than likely over, the crossover from ladies’ football to AFLW is about to reach a new peak. In an economic and social climate that looks unsteady and unpredictable, one thing is certain: the number of women footballers hopping on flights to Australia looks like it’s about to soar past the record high of 18 in a season cut short due to Covid-19.

As of now, 15 women footballers are scheduled to return to their AFLW careers in a season that’ll kick off in February 2021, as the AFLW season sees an expansion due to appetite, desire and sheer demand for the oval ball game.

Former Mayo footballer Cora Staunton will once again play for Greater Western Sydney Giants and will return for a full season after recovering from a near career-ending leg break. Mayo player Sarah Rowe has re-signed with Collingwood, while her Mayo teammates, sisters Grace and Niamh Kelly, have also signed for the West Coast Eagles, alongside Tipperary star Aisling McCarthy, after her transfer from Western Bulldogs. Clare star Ailish Considine, who won the inaugural season back in 2018, inked a new deal with the Adelaide Crows earlier this month.

Basically, the ladies’ footballer to AFLW masterclass is an opportunity for those who want a taste of the semi-professional life, while also furthering their own career prospects off the pitch. Aisling McCarthy has spoken in interviews about how her former team provided her with opportunities to advance her physiotherapy career, while Sarah Rowe came home from Australia with training in hypnosis and neuro-linguistic programmes.

The AFLW also has seen an incredible rise in all areas essential to keeping the women’s game going. Taking the weird, wild and wonderful 2020 out of the equation, 2019 saw the AFL’s revenue increased to a record $794 million (€483 million) due to broadcasting and commercial revenue streams. This enabled the AFLW to receive an incredible $6 million (€3.6 million) in 2020, allowing for the expansion of 14 teams.

And that wasn’t the only impressive thing about AFLW’s expansion. In the incredibly murky, tricky and confusing world of collective bargaining agreements (CBAs), the AFLW and players association successfully navigated a far superior CBA, seeing player wages as a whole almost double from the 2019 season, 120 additional players welcomed to the competition, and 23 extra home and away games added.

While 2020’s season was obviously short-lived given a global pandemic, the general consensus was how successful the AFLW franchise has been as a whole, while riding on a great wave, seeing women in sport in Australia rise in popularity and also coverage. Since 2013, female football participation has boomed from 195,000 to 530,166 in 2019, reflecting 32 per cent of all Australian football participation last year. Away from AFLW, rugby sevens in Australia saw a massive increase in participation after the sevens women’s team were successful in capturing gold at the Rio 2016 Olympics.

While ladies’ football, and women in sport as a whole, has seen a surge in popularity and demand, the one thing we still struggle at is making it consistent. This applies in the context of attendance figures, general equity and equal access and treatment between men and women and in general how the game is run to make sure it’s meeting peoples demands.

Sure, it’s great to see All-Ireland figures reaching new levels year on year, but that fixation on the final number has impacted on the games before the final. From round-robin all the way up to the semi-finals, you can guarantee those same faces are there time and time again.

This isn’t to reflect poorly on our sporting organisations; this is merely suggesting a successful growth in the game is to analyse a whole season, rather than pad figures with huge All-Ireland final attendances.

The AFLW has succeeded in achieving all its short-term goals in kicking off a whole new venture. As far as business models go, the AFLW is essentially how you want every women in sport campaign to start off and go. While those within our ladies’ football might argue poaching players is bad for our game, maybe taking off the rose-tinted glasses and reflecting on why these players are going might be more beneficial.

AFLW has only just started in terms of successfully pushing women in sport, and it’ll be a long time before its momentum even begins to slow down. As far as business models go, the AFLW seems to be doing everything to perfection.