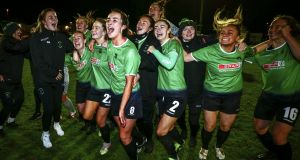 In a season of unpredictable chaos and hoping for the best, it was the consistency of Peamount United, and in particular Karen Duggan and Áine O’Gorman, that shone through a scrappy and competitive Women’s National League.

While Peamount manager, James O’Callaghan, predicted the title-deciding game would be an excellent advertisement for the Women’s National League, he probably didn’t anticipate the dramatic end-game courtesy of a dogged Shelbourne.

The finale, which technically wasn’t due to Peamount United’s extra game in hand, was always expected to be a cracker.

Shelbourne, a tough, quick and tactical side, hoping to extend their lead at the top of the table to four if they defeated Peamount, thus taking the title, were effectively lacking in what Peamount have shown throughout the last number of years – an ability to win big games, no matter how ugly or pretty it is.

Peamount are now looking for the famous double in the FAI Cup final next month when they meet Cork City, a side they comprehensively beat 3-0 away just a fortnight ago. Peas are blazing a trail not only in Ireland but in Europe, where they took Glasgow to a penalty shootout in a Champions League first qualifying round. It’s certainly been a while since we saw an Irish team mixing it with the best.

The Irish women’s national team are facing a daunting task against Germany in a must-win game in Tallaght to qualify for the Women’s European Championship in 2022, probably the most challenging tournament in the world. But while these games and qualifying campaigns come and go, to sustain a decent level of competition, the Women’s National League needs to be included in a plan to drive the standard of women’s football here in Ireland.

The Women’s National League has been a great stepping stone for players to start their career, only to outgrow the league and flock abroad to pursue excellence elsewhere.

Take Cork’s Denise O’Sullivan and Megan Connolly, who are now regulars in the Brighton team, alongside Rianna Jarrett. Take Leanne Kiernan in a West Ham side that are quite frustrating to watch. Take the outrageously versatile Katie McCabe – and last year, Louise Quinn – who brought Arsenal to championship glory for the first time in many years. Grace Moloney has cemented her status as Reading’s number one, and even featured in the FA WSL team of the week.

The WNL has never struggled to produce star quality. What the WNL lacks is what the majority of growing leagues across the world lack, stability and an ability to generate income and sustainable growth throughout a short- and long -term period. It can obviously take the short-term precedent across the pond with the FA WSL, or go further to the NWSL, but what the league needs here is not a one-size-fits-all, rather an adaptable plan that can be moulded to clubs and their needs.

Interest too must be driven from within the clubs. While some, such as Cork City, have generated content on social media and continued to prevail, others, either from a lack of interest or funding, just don’t seem to be on the same wavelength. It’s critical everyone has the same tools at a time where visibility is essential, not only from a ‘Can’t See, Can’t Be’ point of view, but from the idea that if nobody can go to games, why not try to drive growth from the comfort of people’s homes?

This is all incredibly important when it comes to the national team’s success. We have seen from the men’s teams what happens when no players are organically grown through homegrown structures. Sure, we’ve had anecdotal success stories, but like everything in professional sport, they’re a mere one per cent.

The Women’s National League could be a viable entity, for now, to get girls and teens into football. The lure of going abroad will always be there, you’re never going to end that.

But a successful, competitive and growth-based league could help the national team in years to come. It’s time some clubs get serious or risk becoming another ill-fated story and another cautionary tale in the women’s game.

While Peamount, Shelbourne and Wexford Youths continue to blaze a trail, and as the gaps continue to close between those labelled elite and not elite, it would be a shame for girls in other regions to lose out, like the men’s teams, simply because there was no funding or no interest.