Joanne O’Riordan: O’Gorman’s return to the fold a timely boost for Ireland 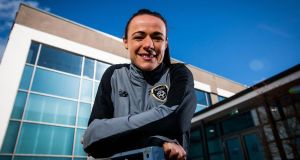 Aine O’Gorman: Peamount United star has won 100 caps and scored 13 goals since making her debut for the Republic of Ireland in 2006. Photograph: Ryan Byrne/Inpho

After reaching a century of caps at international level at such a young age, it seemed the door was closed too early on Áine O’Gorman’s international career.

The versatile and experienced forward is an incredibly useful asset for any squad. Having played in midfield and on the wing for her club Peamount United, it was patently clear to Women’s National League devotees that O’Gorman has so much more to give.

After announcing her shock retirement in 2018 having received her 100th cap, the Irish midfield seemed to be in decent shape. With Cork midfielder Denise O’Sullivan winning MVP for her club Carolina Courage for the second year in a row, Katie McCabe becoming an invaluable member of Arsenal’s women’s team and Niamh Fahey continuing to grow game-by-game it looks like O’Gorman might fit in perfectly . . . and why not?

Having captained Peamount to their first bit of silverware since 2012, O’Gorman has time and time again proven herself to be a leader both on and off the pitch.

After scoring a hat-trick for Peamount the 2010 FAI Women’s Cup final, O’Gorman became an Irish stalwart and a talent recognised by many fans of the women’s game.

After lifting the WNL Trophy and capping a stellar season for Peamount, which saw them claim 18 victories out of 21 matches, with just one defeat, many were convinced O’Gorman had more to give.

Of course, when she started her career, women’s football was in a completely different place. In 2010, for example, a 21-year-old O’ Gorman lit up the women’s final at Tolka Park against Salthill Devon. Nowadays, women’s cup finals are played in the Aviva Stadium in conjunction with the men’s decider to bring in a stellar crowd.

For O’Gorman, success was limited when it came down to the team, but individually she continued to show her brilliance and was duly rewarded.

While things have always been tough when it comes to the national team qualifying for major tournaments, O’Gorman has seen it all.

In 2006, at the age of 16, she made her competitive first start against Germany after impressing against Denmark in the Algarve Cup and thus began a decade -long international career. O’Gorman had already made it to 38 senior caps before signing for Doncaster Belles in 2010; it remains an incredible achievement for a 20-year-old.

Fast forward to 2015 and O’Gorman finally got to captain the Irish team against the USA. Some would argue her talents were not best utilised in the team in that period as she was in and out of defence in a weirdly experimental line-up through the years that saw Ireland miss out on opportunities to qualify for a World Cup or a European Championship.

In fact, the closest Ireland got to any major tournament was in the last World Cup qualifiers, which turned out to be the last time we assumed we would see O’Gorman in an Irish shirt. She earned her 100th cap in 2018 in a 1–0 defeat by Norway which saw Ireland eliminated from qualification.

While it is obvious there is more to any good team than just one player, O’Gorman has proved time and time again the importance of experience and leadership among a relatively young team.

But this time around the national team has a different feel to it, an almost feel-good factor. Now, we have a midfield capable of playing the ball and a forward line that can actually scare defences.

While the omission of Man City’s Amber Toland surprised many, especially given how Ireland currently have a lengthy injury list, all that is left for this Irish team is to sharpen up defensively and in goal.

While the draw away with Greece, courtesy of the home side’s late equaliser, was incredibly frustrating and showed how Ireland struggle against compact and well-drilled defences, the goals conceded against Ukraine were a series of unforced errors which must be eradicated if Ireland are going to make the next step.

With a strong Germany side expected to win the group, and second-seeds Ukraine having made a poor start, Ireland now face two crucial qualifiers for Euro 2021 against Greece (on Thursday) and Montenegro (away next Wednesday) as they bid for a top-two finish and at least a playoff spot. The return of O’Gorman adds some valuable experience to the team’s ongoing quest