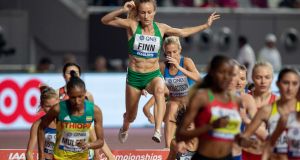 An Olympic year is something to embrace, get hyped about and, more importantly, cap off a cycle of training, blood, sweat and tears . . . all in the hope of representing your country with immense pride. Within the Duhallow boundaries, Michelle Finn has, by and large, come to terms with her current situation: yet to qualify, high in the rankings, and raring for road in the 3,000m steeplechase to Tokyo.

“I think at the start when it happened first I wasn’t loving it. Just because I was going really well in training, and stuff, and I had committed so much to this year,” she says, semi-laughing at the fact her hard work almost paid off. “I realise that you don’t get to be an elite athlete by having everything go so smoothly. We’re almost trained to deal with things going wrong, and getting over it and getting on with it. So I’m kind of to that stage now of just, I’ve thought about it, I’ve been sad about it, I’ve been angry about it, and now I’m just getting on with it.”

If there’s no track races in December, it will be next year before we can even qualify

Finn had run a personal best in February of 9.38 during the Sydney Track Classic 3,000m steeplechase, which is eight seconds off the set qualifying time. With qualifying set to resume in January of next year, Finn is secretly confident that if all things go well, from global pandemics to injury setbacks, she will be repping the green of Ireland in Tokyo.

“The time is 9.30, I ran 9.38, I’m like eight seconds off it, except that I’m high up in the rankings. I’m sure if I can run that time in January that I could run faster in the summer. We can’t qualify until next year. The 1st of December it opens again, but, if there’s no track races in December, it will be next year before we can even qualify.”

Things are that bit harder in Cork, as pointed out by Paralympic discus contender Niamh McCarthy and race-walker Brendan Boyce, who have seen Dublin-based athletes able to get access to facilities while grounds here remained closed. At the time of interviewing, Finn had no access, very little guidance and tended to stick to her own plan, constructed with her trainer.

However, the roads of Castlemagner are a far cry from what standard an expected Olympic athlete should be running on.

“I live in the countryside, and there is no flat road. You can train, and you can stay fit. I can do kilometre reps, or mile reps, or 400-metre reps or whatever it is. The times are so different than the track, it’s hard to know exactly how fit I am, or how sharp I am, or how unfit I am or whichever. It would be nice to get in the track just to see if I’m close to what I should be at, or where I am really.

Obviously, I’d rather be in a gym. Most of my training is running. It’s not like I’m always hurdling

“I thought about doing time trials for a while, but then I scrapped that idea. Because I just thought if I try and run a time trial on this country road that I’m training on, I’m going to be so slow, no matter how hard I run, or how fit I am. My time is going to be slow, and I just wasn’t ready to accept that. I’ve been training, I’ve been getting my average weekly mileage pretty high, and it’s been pretty consistent. I think I’ve got a lot of back-to-back good weeks of training now. The intensity has been lower, but the basis I think is pretty good.”

Finn has never allowed excuses or fatigue or any distraction to set in. You could forgive her for wanting a day off. After we discuss time off the running, I sit back and realise that every hour I’ve binged a Netflix show, Finn has been working out or training.

“I’m training more now than I was before Rio, or training smarter now than I was before Rio. We do our gym session on Zoom once a week. Which is grand, because we’re just doing it from home, but it’s very adaptive because we’re just using the equipment that we have in our houses. Everybody has different little bits and stuff. It’s better just to keep in contact and see everyone and people doing it. Obviously, I’d rather be in a gym. Most of my training is running. It’s not like I’m always hurdling.”

She has a box, a hurdle and an open road.

“I try to get out at 9:30 every morning. If I’m training twice a day, it’s 9:30 in the morning and 5:30 in the evening. If I’m training once a day, it’s generally 9:30 in the morning, so it’s routine and habit as much as motivation. It’s easier to get it done and just have it done, but it’s rare that I . . .” Finn pauses and laughs at the realisation. “There wasn’t even one day that I just skipped, actually.”

Thinking back to when Finn ran in Rio, it was a work colleague of my father who informed the whole town about how his niece was representing Ireland at the Olympics. While we were all in awe someone so close was on the grandest stage of them all, it soon became an even more significant achievement when we discovered she did it off her own back financially. The Olympic dream doesn’t come cheap after all.

“I was teaching, and then I left my job, so technically I was a full-time athlete. I left my job so I could go on a three-week training camp. Obviously, if you’re teaching, you can’t just leave for three weeks. You might get a week here and there, or a long weekend. I needed to be able to go – even for training camps you need three weeks to get the benefits. I wanted to have the option of that, so then when I’m working I come back from a training camp, and I’ll do a bit of subbing.

I’m making that choice for now. I know that at any time I can go back and teach

“Now I have no races, and I can’t sub. I came back from Australia from a training camp, and my plan was to do a few weeks of subbing before the summer really kicked off. So then the schools were closed, and I was like, ‘I’ll apply, and I’ll supervise the Leaving Cert or correct exams or something.’ Then the exams were cancelled. The little jobs that I could’ve been doing are just disappearing. I’m just acting like a full-time athlete right now.”

We acknowledge how stressful the whole thing is, dipping in and out of savings, the unpredictability of the entire job on top of the demands required to be a professional athlete. But Finn is defiant.

“I’m making that choice for now. I know that at any time I can go back and teach, or I have two undergraduate degrees, I have a master’s. It’s not like I have to do this, but I’ve chosen to do this. One of my friends said, ‘If this was my job, it would be a dream job.’ But it’s not my job. I’m ready to get a more stable job or whatever, go back to work.”

One thing is for sure. Michelle Finn has been an incredible source of inspiration and excitement within Duhallow. After telling a few pals this interview was my next task, everyone had a good story of interacting with her. Pride was a word that came up an awful lot. And while Finn may still be unsure of her future and unaware of the impact she has made, she’ll continue to put in the hard work, the grind and trust the process.

Money and global pandemics aside, she has the Dublin Track Club, Melbourne Track Club and a winner’s mentality to succeed at the highest level. No excuses.