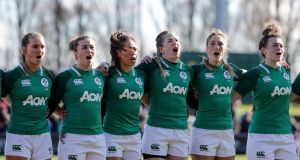 Ireland players stand for the National Anthem before their game against England in February. Photo: Laszlo Geczo/Inpho

The IRFU will charter a plane for the women’s Six Nations fixture against France in Lille on November 1st.

Progress takes time. Eight years ago the men’s squad and officials filled a charter to Paris on the same day the women’s squad were expected to make a connecting flight, in the same city, to arrive in Pau the night before their Test match.

They missed the connection, due to rush hour traffic, and so began a 17-hour, 800km journey on an overnight train with six women forced to share each cabin. Some had to sleep in the corridor. Arriving in Pau at 7.30am they played the game at 3.30pm, bravely losing 8-7 to the French.

The IRFU rejected the accusation that their treatment was based on gender but accepted “some responsibility” for the logistics meltdown.

The very next season Fiona Coghlan’s team completed the grand slam, a year later they reached a World Cup semi-final.

In 2020 the IRFU are treating Ciara Griffin’s team like their male counterparts. Due to Covid, the provinces must charter planes for away games in this season’s Pro 14.

The Ireland squad and coaching staff depart for Lille on Saturday October 31st and return to Dublin on Sunday evening to ensure the amateur players can return to work on Monday morning.

Although the Irish players have played next to no competitive matches since their 27-0 defeat to England in February, they are expected to avenge last year’s loss to Italy at Energia Park in Donnybrook this Saturday (kick off 6.30pm).

The squad, who are training out of the IRFU High Performance Centre in Abbotstown, received a huge lift in the availability of Leinster captain Sene Naoupu and Beibhinn Parsons, who missed the England match as she was preparing for her Leaving Cert mocks. The teenage winger has since taken up a sport scholarship in UCD where she is studying biomedical science.

The team will be announced on Thursday.

When the 2020 Six Nations is completed Ireland’s focus switches to their three December qualifiers to reach next year’s World Cup in New Zealand.