Ireland women’s shake off the rust to beat Italy

They will be pleased with the win, although a bonus try would have greatly helped 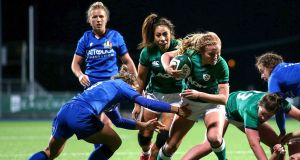 Ireland moved into second place on the Six Nations table after a scrappy win over Italy in Donnybrook on Saturday evening. Three tries from Lindsay Peat, Claire Molloy and a penalty try late in the second half was enough to turn the match for the home team.

After eight months with no competition the passing and set pieces, in particular, made it heavy going for the Irish team, when it could have been so much easier. In the end they will be pleased with the win, although a bonus try would have greatly helped.

The first half initially looked like Ireland were in for a fraught night. The lineouts malfunctioned and the scrum was consistently pushed back. A little luck stopped Italy going ahead on six minutes, when outside centre Michaela Sillari knocked on steaming up the left.

With Giada Franco a force of nature in the Italian backrow Ireland came under extreme early pressure. For four minutes late in the first quarter Italy were attacking in waves with Ireland hustling and brave tackles landing across the pitch knocking them back.

It was Italy’s best phase in terms of sustained pressure and when Linda Djougang turned the ball over for Ireland, it seemed they had weathered it. But minutes later Ireland kicked out on the full and Franco bumped up the yards with Ireland stretched. This time hooker Melissa Bettani made the line with Sillari converting for 7-0.

Irish teen flier Beibhinn Parsons got her first touch on 23 minutes and made 20 metres as the home side grew into the challenge. Three minutes from halftime a training ground attacking lineout maul offered prop Lindsay Peat a birthday try with Hannah Tyrrell converting.

Minutes later and with Irish confidence inflating, Peat was again involved to offload to flanker Clarie Molloy as Ireland swept forward for a second try and a satisfying 14-7 halftime lead.

Ireland would have believed they could build from a go-forward end to the first half, but the second 40 minutes was as much a frustration with passes going astray. Still the team did enough and in a twist of irony it was the creaky scrum that gave them their third try.

A big push on 70 minutes from close in and hey presto the Italians were going backwards. Their only option was to collapse the scrum and the referee, after looking at the big screen, awarded the try.

“I think we beat ourselves up for 30 minutes and we didn’t play with the tempo. We need to finish more and score more points. This is the longest gap for all of us ever in our career. We are going to be rusty coming back,” said Molloy who was named player of the match.

In the end comfortable but with lots to shine and lots to patch up.