Forwards coach McGinnis believes side is primed for a big performance 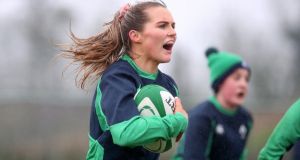 Aoife Doyle is back in the fold for her first Six Nations start since 2015. Photograph: Bryan Keane

The Ireland women’s rugby team will seek their first competitive win in just under 12 months when they welcome Scotland to Donnybrook for a Six Nations opener on Sunday afternoon (kick-off 1pm).

Adam Griggs’s side last tasted victory on February 8th of last year – a bonus-point triumph against the Scots in Glasgow. They subsequently suffered consecutive Championship reversals at the hands of Italy, France and Wales before also losing out to the latter in a November Series international.

It has been a difficult transition since the 2017 World Cup for this side, who have recorded just three wins in 13 games during that period. Nevertheless, forwards coach Steve McGinnis believes they are primed for a big performance in their maiden encounter of 2020.

“It’s the opening game of the Six Nations, so both teams are out to win. They’re not going to come over here and roll over,” McGinnis said of Scotland.

Ireland will be slightly hamstrung for the visit of Scotland due to the absence of Munster duo Eimear Considine and Enya Breen through injury. However, winger Aoife Doyle and hooker Cliodhna Moloney are back in the fold for their first Six Nations starts since 2015 and 2018 respectively.

“It’s good to have these girls [Doyle and Moloney] back. They’re talented rugby players. Just because they haven’t been involved for a small while doesn’t mean they forget it. It’s a bit like riding a bike. They’ve been there, done that,” McGinnis added.

Follow a lengthy spell within the Sevens programme, Doyle takes her place in the Irish back-three alongside Lauren Delany and Galway teenager Beibhinn Parsons. Sene Naoupu and Michelle Claffey rekindle a familiar midfield partnership, while Ellen Murphy is given the nod at outhalf.

The Gloucester-Hartpury star is one of five English-based players in the starting line-up with Lauren Delany, Moloney, Edel McMahon and Anna Caplice also plying their rugby trades in the Tyrrells Premier 15s.

Tighthead prop Lyons is a clubmate of Caplice at Harlequins and takes her place among the replacements. Railway Union pair Dorothy Wall and Claire Keohane are in line to make their Ireland debuts off the bench.

Despite finishing bottom in last year’s Six Nations, Scotland will not be dismissed lightly. After shipping a number of heavy defeats to their Celtic cousins, they finally gained the upper hand at Donnybrook in the 2018 Championship.

This will be their first game under the stewardship of former Ireland head coach Philip Doyle, who will be eager for his new charges to address their own recent slump in form.

1 Irish pack must expose the weakness in England’s backrow
2 Keeping Donegal on the road to success a costly business
3 TV View: Roy Keane but Daragh’s keener as Late Late fails to shoot the lights out
4 England v Ireland preview: Ireland’s revival to face its sternest test
5 Ireland Slam England at the Gardens to open up Grand ambitions
Real news has value SUBSCRIBE